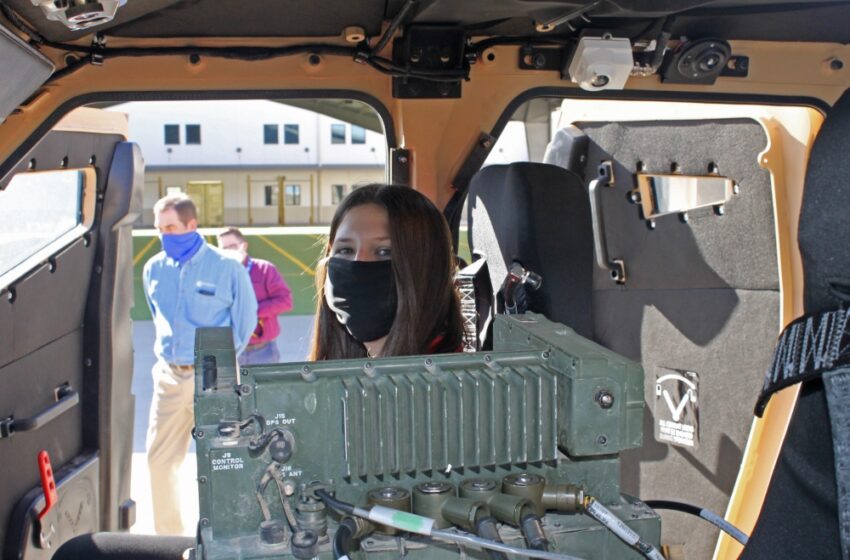 When Payton Mitchell, a seventh-grader at St. Mark’s Middle School in El Paso, thought of all the Soldiers sacrificing for their nation, she wanted to let them know they were appreciated.

“I love seeing Soldiers; I’m intimidated, but I know they help us,” Payton, 12, said. “I think they don’t get recognized as much as they should, so I decided I could write letters to show them my appreciation.”

That initial thought has led Payton to write 500 letters to Soldiers, so far. The letters are mailed out through the American Red Cross’ Thank a Hero program. Payton has also inspired her classmates to get involved in the effort, and they have written more than 100 additional letters.

When Col. Tobin Magsig, commander of the U.S. Army Joint Modernization Command on Fort Bliss, heard about Payton’s effort, he wanted to return the appreciation. On Nov. 17, Magsig invited Payton and her parents, Mark and Anne Mitchell, to visit JMC. Magsig and JMC’s senior enlisted advisor, Command Sgt. Maj. Christopher Gunn, took Payton and her parents on a tour of JMC, including a look at the Army’s new Joint Light Tactical Vehicle (JLTV) and how JMC’s Soldiers work to stay physically fit.

Magsig awarded Payton with a JMC coin and also delivered a coin and letter of thanks from the Undersecretary of the Army James McPherson.

“We were so impressed by your dedication and spirit, and we just wanted to say thank you,” Magsig told Payton. “America’s Soldiers are always happy to hear their service is appreciated. We are fortunate to live in a nation where citizens like you so readily demonstrate their enthusiasm and gratitude.”

Maj. Michael Van Kleeck, JMC’s Futures Chief, also expressed his appreciation to the Mitchell family during the tour of JMC.

“Speaking as a Soldier who has served in Iraq, Afghanistan, Egypt and Korea — when you open a care package, even if it’s from someone you don’t know, and there is a letter thanking you — it’s just a little reminder that someone out there appreciates the sacrifices we’re making for our country. It does make a difference.”

After the tour, Payton said she was impressed and “scared” by the exercise routine the Soldiers had demonstrated. “I would pass out,” she said. In the end, she was just glad that “three minutes of my day writing a letter could make their day better.”

Others who want to join in the Thank a Hero program can contact their local Red Cross office.