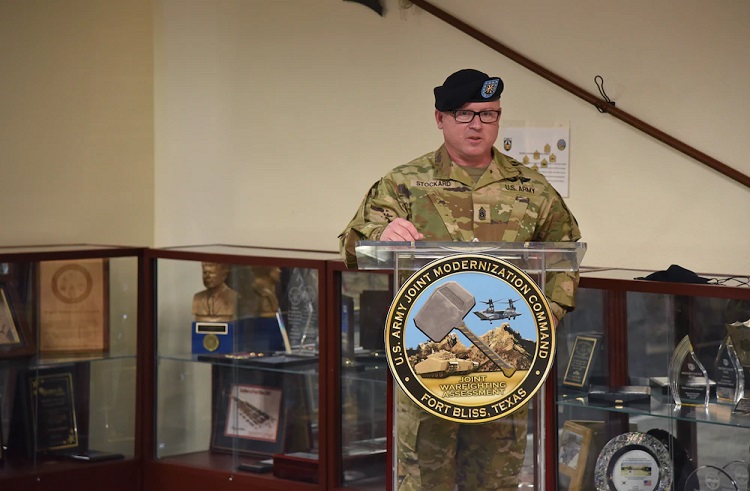 When Command Sgt. Maj. William “Shane” Stockard first enlisted into the Army at age 24, he wasn’t even entirely sure what being an infantry Soldier meant.

But 22 years later, Stockard will be helping forge the future of infantry as senior enlisted advisor at the U.S. Army Joint Modernization Command.

Stockard was working in the restaurant business in Amarillo, Texas, when he realized he needed a change in his life. Besides a grandfather who passed away the year he was born, Stockard didn’t have any family members in the service. But he heard some people talking about the Army, and it sounded interesting.

“I was older, and I was engaged, and really didn’t see myself going anywhere in the restaurant business,” Stockard said. “I wanted a challenge. People were talking about it, but I didn’t really know what the Army was, to tell you the truth. I didn’t grow up around it. I ended up getting infantry, and I almost didn’t know what infantry was; I didn’t watch any war movies.”

Though Stockard may not have known what he was getting into originally, he credits his decision to continue to serve in the Army to two things: Leadership … and jumping out of airplanes.

“I’ve had great leaders who made me want to stay in the Army,” Stockard said. “And it was fun. I was on jump status for 19 of my 22 years in the Army. I enjoy jumping out of airplanes.”

Though the job involves a lot of travel, being the senior enlisted advisor at JMC won’t offer Stockard many chances to jump out of airplanes; he’ll have to stay on through landing like the rest of us. But what the job lacks in airplane jumps, it makes up for in opportunities to help shape the future of the Army.

“JMC is a great opportunity that came about,” Stockard said. “I get to see what the Army is going to look like in 2028 and 2035 and be a contributing factor to that. I get to be a part of the larger Army. This is a small command, but we have a huge responsibility for the Army and the Joint community. When I’m long and gone, I can look back and say, I was a part of that.”

Stockard said he is looking forward to being part of Joint Warfighting Assessment 21, coming in June, as well as Project Convergence 21, coming this fall. These live experiments assess and ensure the Army’s capability to perform Multi-Domain Operations. In addition to these yearly experiments, JMC assesses potential Army equipment year-round in smaller exercises.

In his free time, Stockard said he enjoys spending time with him family and riding his two bikes: A traditional pedal bike, as well as his Harley-Davidson motorcycle. His family enjoys the nearby mountain town of Ruidoso, New Mexico, and the Mexican restaurants of El Paso.

“You never go hungry here, if you have money to go out and eat,” Stockard said.

“JMC is proud to welcome CSM Stockard to the Army Modernization Enterprise. We look forward to his advice and guidance pushing us forward and reminding us that the end goal of modernization is for young Soldiers to be able to use modern tools to help them dominate the battlefield,” JMC officials added.