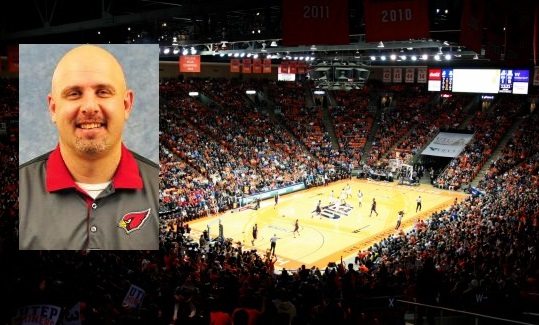 UTEP Basketball Coach Tim Floyd announced on Monday that Kris Baumann has been hired as an assistant coach with the Miners.  Baumann comes to El Paso following four years as the head coach at Trinity Valley Community College, where he forged a 110-26 record.

“We’re excited about the addition of Kris Baumann,” Floyd said.  “He is an excellent coach and comes highly recommended by one of my former assistants, Kermit Davis, who worked with him at Idaho.  His junior college team was ranked number one in the nation the majority of last season and finished 33-2.  They have been to three consecutive national tournaments.  We think he’ll be a great fit.  He excelled at recruiting high-major caliber players to Trinity Valley Community College, and we’re confident that he’ll be able to do the same here.”

“To be able to work for coach Floyd, who is regarded as one of the most highly thought of coaches in all of college basketball, was too good of an opportunity for me to pass up,” Baumann said.  “I’ve heard nothing but great things about the history of UTEP basketball and the support in the community.  I’m excited to recruit to it and be a part of the tradition that is UTEP basketball.”

His last three Trinity Valley CC teams have posted 29, 28 and 33 victories respectively.  Last year’s 33 wins duplicated the school standard.  The Cardinals reached the Elite Eight of the NJCAA Tournament in 2014 and 2016, and the Sweet 16 in 2015.  They were the number one team in the country for seven consecutive weeks (and the top seed in the NJCAA Tournament) in 2015-16 and earned a final ranking of no. 5 in 2014 and 2016.

In addition to reaching the NJCAA National Tournament three years running, the Cardinals were the Region XIV conference champion from 2014-16.  They were also the Region XIV tournament champion in 2016 and runner-up in 2014.

While at Lamar CC, Baumann coached NJCAA first team All-American Quinton Hosley and five players who received NCAA Division I scholarships.  He coached 15 players who earned Division I scholarships at Garden City CC.  He led Garden City to the NJCAA National Tournament for the first time in 53 years in 2009 as well as the Region VI title.  He was named the 2009 NJCAA District VI Coach of the Year and was a head coach in the NJCAA National Team All-Star Game.  Baumann coached two NJCAA All-Americans (Julian Allen and Thomas Manzano), two Jayhawk West Conference Players of the Year (Allen and Roy Bright), and the 2009 NJCAA Region VI Tournament MVP (Manzano) during his stint with the Busters.

He previously served as an assistant coach at Chipola Junior College, Tallahassee Community College and Garden City Community College.  The native of New Plymouth, Idaho led his high school team to a state championship in 1993 and was chosen the Idaho Gatorade Player of the Year in 1994.  He was also selected to the prestigious Nike All-American Camp and the Five-Star Orange and White All-Star Game.

He attended and played at the University of Idaho, where he became one of the top three-point shooters in school history.  Baumann was voted team captain in both his junior and senior seasons and received the prestigious Ronald White Award.

He received his bachelor’s degree in general studies from the University of Idaho and Masters of Business Administration and sports management from Columbia Southern University.

His wife’s name is Dusty.