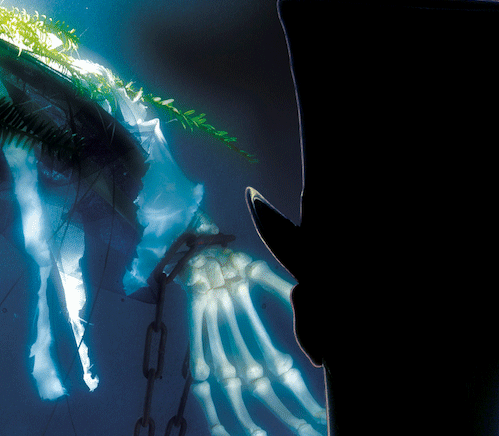 Live theater is an opportunity for patrons to enter into someone else’s vision of a story. This year’s production of “A Christmas Carol en la Frontera” by The University of Texas at El Paso will allow its audience members to use a bit more of their own imagination. | Graphic courtesy UTEP

Live theater is an opportunity for patrons to enter into someone else’s vision of a story. This year’s production of “A Christmas Carol en la Frontera” by The University of Texas at El Paso will allow its audience members to use a bit more of their own imagination.

UTEP’s Department of Theatre and Dance has adapted the annual holiday show because of the coronavirus pandemic into a one-hour radio play that will be broadcast at 8 p.m. Friday, December 18, 2020, on KTEP-FM (88.5).

The show, a version of Charles Dickens’ 1843 novella with a U.S.-Mexico border twist, tells the story of how three spirits help a miser to reflect on his life’s choices on Christmas Eve. This version takes place in the 1920s in a community similar to El Paso. The University has produced some version of the parable since 2006.

Greg Thompson, a department lecturer with years of performance and staging experience to include voice work, directed the show and said he believes that the audience will feel a range of emotions from joy to fear to sadness, and be left with a sense of the holidays.

“It’s a great story and I think we tell it really well,” Thompson said. “I just want (the audience) to get a cup of hot chocolate, settle in and enjoy this experience with us.”

Thompson was relaxed and jovial as he discussed the recently completed project. He praised his 15 actors, many who took on multiple roles. The students rehearsed and recorded their parts virtually from their homes in October. The best takes were spliced together along with sound effects and submitted to KTEP. He said the process was fun and supportive.

The director, who got the holiday assignment before COVID-19, said that he looked for actors who had a vocal presence and were willing to take chances with their voices. While the actors would not be on a stage in costumes, Thompson said it still was important for the actors to envision the scene and use their bodies to shape the texture of their character’s voice to generate their best performance.

“It was fun to study and learn and play with the cast to create our production,” Thompson said. “I think we all learned a lot and definitely had a great time.”

Daniel Maciel, who played the lead role of Ebenezer Scrooge, also lauded the cast and crew for the talent and dedication they brought to the project. He said the show should create a bit of nostalgia to those old enough to remember radio theater, and that the rest of the audience should just enjoy a unique performance that will enhance the holiday season.

Maciel works as a choir teacher at William D. Slider Middle School. The music graduate student, who expects to graduate in spring 2021, earned his bachelor’s degree in music education from UTEP in 2016.

The El Paso native and first-generation college student has performed with various on- and off-campus groups through the years. He said he wanted to be in this production because he loves the Dickens story, especially the adaptation that identifies with the border culture, the chance to work with Thompson and the occasion to act without having to sing.

Maciel mentioned his efforts to find the right voice for Scrooge that would allow him to speak as well as to maneuver it higher or lower as needed.

“That is a lot harder than it sounds,” said Maciel, who graduated from Riverside High School in 2011. “It took a while to prevent my regular voice from cutting in.”

The sounds of everyone’s voice, some of the music and the sound effects fell to Gilliam, the student sound supervisor, and two student assistants. The effects included people walking, people walking in snow, doors opening, wind blowing, coins jiggling, and a few supernatural sounds. He called it an enjoyable experience technically, creatively and socially.

“We all had a lot of fun joking around and being creative together,” said Gilliam, who also assisted on several other department projects during the fall 2020 semester.

The script was trimmed by the show’s original adapters, Adriana Dominguez, Ph.D., assistant professor of theatre arts and director of the B.A./BFA theatre programs, and Jay Stratton, assistant professor of performance. Their most important job was to help tell the story with no visual cues. For example, the Ghost of Christmas Yet to Come usually is a silent role, so he was given limited dialogue and a soundscape to signify his presence.

Dominguez said the latest variation was a challenge because she and Stratton needed to find the right words to create the proper visual imagery without the lights, costumes and scenery.

“The thesaurus has been an essential tool during this process in English and in Spanish,” Dominguez said.

The show will have a two-minute “intermission” between acts. During that time, Marina Monsisvais, host of KTEP’s “State of the Arts,” will share the names of the cast and crew.