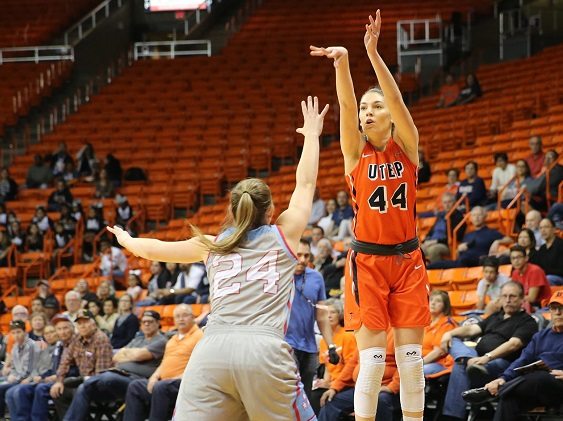 It wrapped a 7-0 run around the third and fourth-quarter break to get within three with 9:01 remaining in regulation. The Miners cut it to two on a pair of occasions but never could climb all the way back. A desperation off-balanced 3-point shot from Zuzanna Puc hit the side of the rim as time expired, allowing LA Tech to hold on for the win.

“It was a fun game to be a part of and I’m really proud of our team because I thought we battled really hard in this game,” UTEP head coach Kevin Baker said. “We were never out of it; we did play poorly in the third quarter but we sort of found a way to dig out of that hole. We’ve done that all year where we get down but don’t get out.”

The Miners had big games from Seda, Zec and Puc but no one else on the squad scored more than six points. Faith Cook contributed through her passing with a season-high tying six assists.

LA Tech was paced by a double-double from Alexus Malone (21 points, 11 rebounds) while Kierra Anthony (15 points) and Taylor Stahly (10 points) chipped in as well.

It was back-and-forth over the first three minutes with the Miners leading by one (6-5) before the Lady Techsters peeled off seven straight points go up by six (12-6). UTEP struck back with six unanswered to pull even with 1:10 left in the period but the visitors knocked down a triple to carry a three-point cushion (15-12) into the second quarter.

A free throw followed by a transition lay-up off a steal reinstated a six-point edge (18-12) for LA Tech 30 seconds into the second frame. The Miners went to work and began to chip away at the deficit, and evened the ledger with a lay-up by Seda off a sweet feed from Roeshonda Patterson. After LA Tech went back ahead by four (26-22) the Miners unleashed a 9-2 run to surge out to a 31-28 lead with 1:58 to play in the half. It remained a 3-point cushion (33-30) in the waning seconds but the Lady Techsters got an offensive putback to inch within one (33-32) through 20 minutes of action.

LA Tech had an exceptional start to the third quarter, ripping off an 14-2 run to surge ahead by 11 (46-35) with 6:46 to play in the frame. Two free throws by Zec were followed by a jumper from Puc to get the Orange and Blue within seven (46-39) but the visitors regained a double-digit advantage thanks to a triple. UTEP went back to work and reduced the differential to five (49-44) only to have LA Tech counter with its own 5-0 push to go back up by 10 (54-44) late in the period. Puc banked home a runner in the lane to make it an eight-point contest (54-46) heading to the fourth quarter.

Needing to christen the final frame well, the Miners did just that. Patterson drilled a triple followed a Seda lay-up off an outstanding pass from fellow post Puc. The 5-0 spurt in the span of just longer than a minute brought the Orange and Blue to within three (54-51), prompting a timeout by LA Tech. UTEP continued to battle following the resumption of play, but LA Tech made just enough plays to hold on for the narrow win.

UTEP will return to action when it opens up a two-contest roadswing by playing at Marshall at 4 p.m. MST/6 p.m. EST Thursday. Brandon Cohn will have the call for the game on 600 ESPN El Paso. It will also be streamed live on CUSA.tv (subscription required).