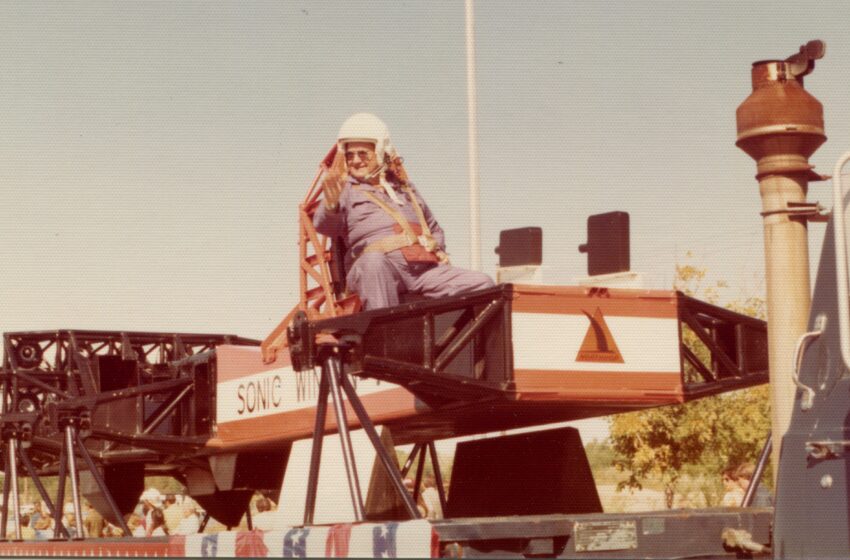 On Wednesday, August 9, the Sonic Wind No. 1 rocket sled, which has long been an icon of the John P. Stapp Air and Space Park at the New Mexico Museum of Space History, will take yet another ride.

This time to Washington D.C. where it is destined to become part of a new exhibit entitled “SPEED” at the Smithsonian’s National Air and Space Museum (NASM). This famous rocket sled is actually a part of the Smithsonian’s collection and has been on loan to the Museum of Space History since its installation.

“It’s kind of bittersweet to see the Sonic Wind leave,” said Museum Executive Director Chris Orwoll. “We’re very excited to know that it will be completely restored by the experts at the Smithsonian and will be highlighted in the National Air and Space Museum’s new exhibit. At the same time, we’re saddened to see this historic artifact that is so closely tied to the Tularosa Basin leave us.” The rocket sled is slated to return to its home in the Tularosa Basin in ten years.

Orwoll went on to say that the museum is working closely with its partners at the High Speed Test Track at Holloman Air Force Base to secure other artifacts to display in the rocket park.

In addition, Orwoll is also coordinating with the Smithsonian in regards to the loan of the Sigma-7 backup capsule for Wally Schirra’s Mercury-Atlas 8 mission. That nine hour flight in 1962 marked the fifth United States manned mission to space and was the longest U.S. manned orbital flight to date, paving the way for the Apollo program later in the decade. The Sigma-7 backup capsule is anticipated to be ready for display at the museum in the near future.

There was great fanfare in 1976 when the International Space Hall of Fame opened its doors. The nearly 90’ golden cube of a building was flanked on the North by the John P. Stapp Air & Space Park featuring several unique artifacts including the Little Joe II rocket, the largest rocket ever to be launch from New Mexico, and the Sonic Wind No. 1 – the rocket sled that Stapp himself rode to become the fastest man alive in 1954.

Stapp’s history making ride was his last on Sonic Wind at Holloman’s High Speed Test Track but he did ride the Sonic Wind more time – in the parade commemorating the opening of the museum as the rocket sled was on its way to become one of the first artifacts on display in his namesake outdoor exhibit.

According to a special tabloid printed by the Alamogordo Daily News commemorating the museum’s opening, “At the completion of the rocket sled tests, the Air Force gave the sled to Dr. Stapp as a souvenir. He in turn donated the sled to the Smithsonian Institution, where it stayed until recently. When the Space Hall of Fame came into being, Stapp requested the return of his sled, and the Smithsonian complied.”

According to the article, Stapp made arrangements with the Air Force to have the sled refurbished and, “The Field Maintenance Shops of the Aeronautical Test Division undertook the actual work to be done, in conjunction with the Engineering branch of the 6585th’s Test Track Division….At the end of the repair process, the sled was repainted red, white and black to match its original color scheme.”

The team also built a special stand to carry the sled in the parade and “at the end of the festivities, the sled will be placed on a permanent base outside the Space Hall of Fame. There it will remain as a permanent landmark to the work of Stapp, and the ongoing work of the 6585th.”

Prep-work for the removal of the rocket sled will take place on Tuesday, August 8. A crane will be brought in on Wednesday to lift it off its base and place it onto a trailer for transportation to Washington. Visitors are encouraged to visit the rocket park, which has free entry, and say a fond farewell to Sonic Wind One.