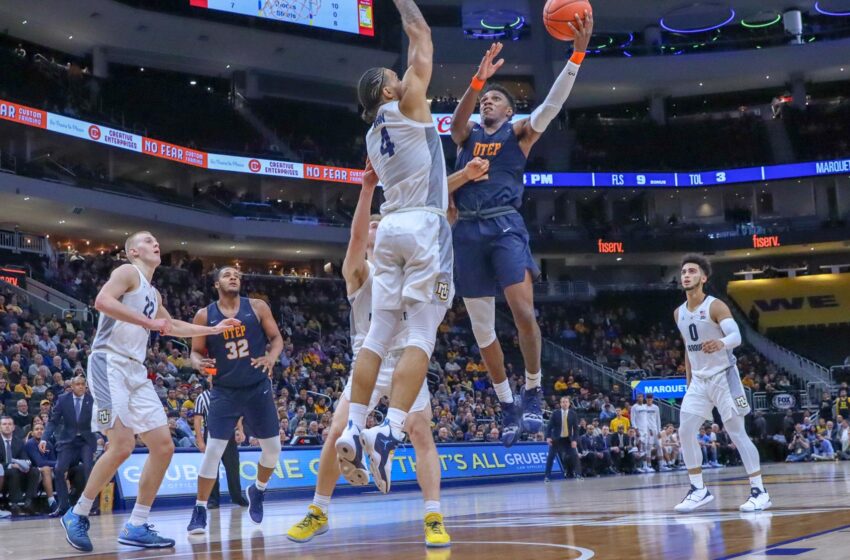 Behind tough play, the young and spirited Miners overcame a pair of second-half, double-digit deficits.

“Marquette is a very good team and a very-well coached team. We knew coming in that we had to compete for 40 minutes. We always tell our guys, whether we get off to a good start, bad start, we got to work the game and settle in, guard some guys and get some stops. Then we can come out and execute on offense,” first-year UTEP Head Coach Rodney Terry said. “We really try to establish an inside presence if we can and work the game.”

With UTEP down seven points coming out halftime and getting within five points (37-32) after Evan Gilyard and Nigel Hawkins free throws, the Golden Eagles went on a 12-0 run to go up 17 points (49-32) at the 14:41 mark. The Miners cut the lead to 12 after an Odigie layup and a Nigel Hawkins three-point bucket. But Marquette answered with a Howard made a three-pointer at the 13:02 mark to go up 15.

The fighting Miners, however, didn’t let the Big East power get the best of them. UTEP got within four points (60-56) after Lathon nailed a jumper with under seven minutes remaining in the contest.

“Once we settled down a little bit and got into our game, tried to get lost playing hard on defense and get some stops, then we got a chance to get back into the game,” Terry said.

During the first half, Marquette opened the contest with a 12-point lead (15-3) at the 12:40 mark after Sam Houser connected on a layup. UTEP chipped away at the lead, while Ountae Campbell got UTEP within a pair of points (25-23) after a made running layup at the 4:54 mark. But Marquette answered with an 8-0 run after Howard made two free throws to put his squad up 33-23.

Lathon halted the run when he hit a step back jumper with three minutes remaining in the half. With his jumper, UTEP got within seven points (37-30) after going on a 7-4 run to end the half.

Lathon scored 15 of his 26 points during the first half, while he chipped in with three rebounds and two steals in the contest.

“This is [Lathon’s] third game in a row that he played a very complete game,” Terry said. “He played with great confidence tonight and I call it ‘swag’ a lot of times. He carried himself with very good swag to compete at this level.”

Hawkins, after a slow start, finished with nine points, including a 4-for-5 effort from the charity stripe. Hawkins added four rebounds, two assists and two steals. Gilyard scored 10 points and tallied three rebounds.

Up Next, UTEP will get a bit of a breather before its next game as it will host UC Riverside on Sunday, December 16 in the Haskins Center with a 1 p.m.

The Miners will then play in the WestStar Bank Don Haskins Sun Bowl Invitational December 21-22. The Orange and Blue will open against Norfolk State with a 7 p.m. tip-off time. The Miners will play the winner of East Tennessee State/Wyoming the next day.