FILE: Lathon, who’s been clutch down the stretch recently, nailed a trey of his own with just over a minute remaining in the ball game, making the count 67-65.

MURFREESBORO, Tn. – Jordan Lathon heaved up a half-court shot with seconds remaining, looking to become a hero for a second time this season, but missed the effort to tie the game as the ball hit the rim and Middle Tennessee pulled out a 75-72 victory over UTEP on Saturday night at the Murphy Center.

“I said to our guys what an unbelievable effort tonight, but I put a lot of this on myself. I’m a man in terms of conducting myself down the stretch and I really hurt the team tonight,” Head Coach Rodney Terry said. “But I’m not going to take away who I am. I’m a fighter and I’m going to fight for my guys. I’m not going to change who I am, but I could probably be better in terms of how I communicate with the officials. I’m going to be who I am and I’m a competitor and when my guys are fighting and doing what I feel like what they’re doing at a very high level, then I’m going to question those questionable calls down the stretch.”

Four Miners fouled out, while Terry was ejected after drawing his second technical foul late in the second half. However, the Miners kept battling down the stretch after find themselves down eight points with just over four minutes left in the ball game.

UTEP (6-11, 1-5 Conference USA), for a second straight game, got off to a fast start, going up as many as 13 in the first half. But Middle Tennessee (5-14, 2-4 C-USA) connected on three pointers and free throws down stretch to win its second consecutive league contest.

Nigel Hawkins led the Miners with 16 points that included a perfect 6-for-6 effort from the charity stripe. Lathon recorded his first career double-double after scoring 12 points and registering 10 boards, while also leading the Miners with four assists.

UTEP outrebounded Middle Tennessee, 33-32, but the Blue Raiders tallied 13 offensive rebounds that led to 15 second-chance points. The Miners turned the ball over 20 times, leading to 27 points off turnovers, and only registered nine assists.

“Some of those fouls started adding up, especially when they’re nickel-and-dime fouls. But that’s neither here or there. At the end of the day we didn’t do a good job at taking care of the basketball,” Terry said. “We had 11 turnovers at the half and 20 for the game. That really was the count of the game within the game. But we shot free throws extremely well, only missing three of those. We have to keep plugging and we’re not going to stop working. We’re going to work on getting better and win some games.”

The Miners were 15-for-18 from the line and are shooting over 70 percent the last 10 games from the charity stripe.

UTEP received balanced scoring during the first half as eight Miners connected on field goals.

After the Blue Raiders tied the game 29-29, UTEP answered with a 9-0 run to go up 38-29 highlighted by Hawkins’s seven points during the span.

But the relentless Blue Raiders, who had come off a big win over then-first place UTSA Thursday night, used another big run, outscoring UTEP 12-0 and going up three points (41-38) at the 13:34 mark in the second period.

Lathon made a jumper to get the Miners within a pair of points (55-53). Following his made jumper Jayce Johnson missed a layup and Hawkins followed with a drive to the hoop before being called for an offensive foul in the paint. At that point, Terry was ejected at the 6:49 mark. Antonio Green made both free throws from the technical foul. Reggie Scurry followed with another pair of made free throws after called foul on UTEP, putting the Blue Raiders up, 59-53.

Evan Gilyard, who scored 14 points, hit a three-point basket to get the Miners within three points (59-56) with 5:41 left in the contest.

The fighting Miners wouldn’t go down without a fight. Ountae Campbell connected on a pair of free throws, while Lathon followed with two of his own and Efe Odigie hit a midrange shot as the trio got their squad within two points (64-62) at the 3:04 mark.

Excitement ensued as Antonio Green stopped that run with a three pointer, but Lathon, who’s been clutch down the stretch recently, nailed a trey of his own with just over a minute remaining in the ball game, making the count 67-65.

The Miners would get within two points on three occasions down the stretch. Kobe Magee banked a three pointer off the glass (72-70) with 12 seconds remaining and Campbell made a jumper (74-72) with six seconds remaining.

But Karl Gamble made one of two free-throw attempts to put the Blue Raiders up three points before Lathon’s last-second attempt.

Campbell and Magee each finished with seven points, while Campbell pulled down six rebounds. Odigie had six points and six boards, and Kaosi Ezeagu scored six points in 17 minutes of action. Paul Thomas, who came off the bench for the first time this season, chipped in with four points and five rebounds in 15 minutes of work.

Thomas, Hawkins, Ezeagu and Odigie all fouled out of the contest.

MT was led by Green’s 21 points on 6-of-17 shooting, but five of those field goals were three-point buckets. Scurry led the way with nine rebounds and scored 19 points. Scurry hurt the Miners with eight offensive boards.

Up next, UTEP will return to The Haskins Center on January 24 against Old Dominion and for a January 26 contest against Charlotte. Both contests are set for a 7 p.m. tipoff. 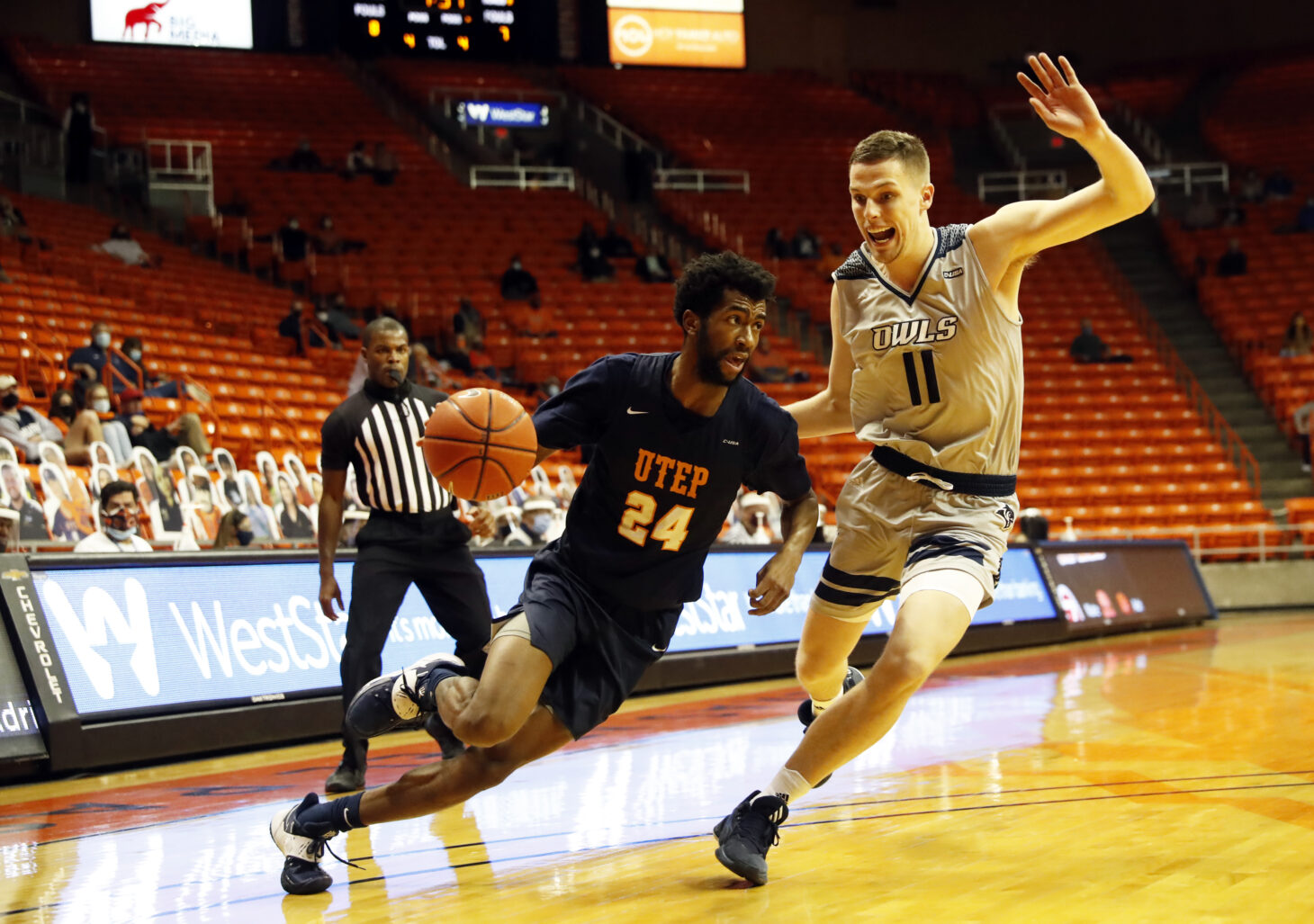