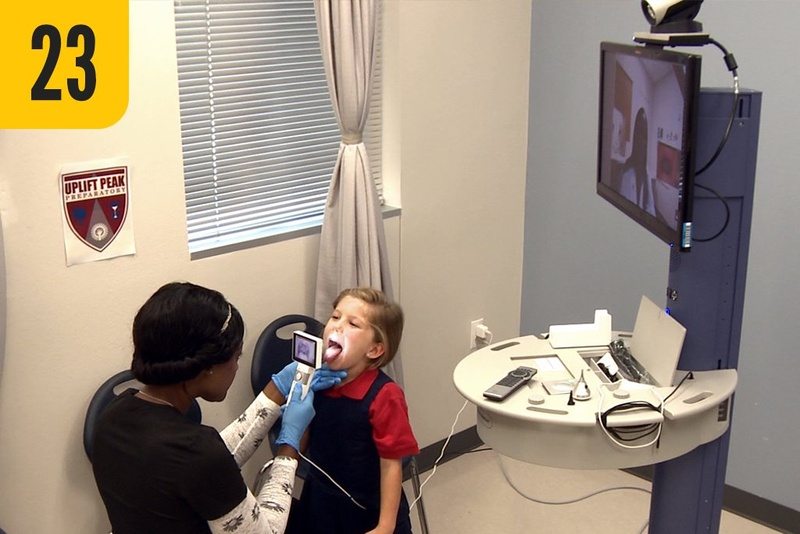 Remote doctor appointments could be coming soon to the school nurse’s office.

Starting Sept. 1, a new law will allow physicians to get paid for seeing children over a sophisticated form of video chat, as long as the student is at school and enrolled in the state’s Medicaid program for the poor and disabled. The law’s supporters say it could lead more schools around the state to set up nurse’s offices equipped to handle remote doctor visits — and save parents time and money.

They say adults shouldn’t have to take time off work and kids shouldn’t have to miss school to get routine health care, like when a child has an ear infection or skin rash, because modern technology allows a remote doctor to get high-quality, instantaneous information about patients. An electronic stethoscope allows the doctor to hear a child’s heartbeat, for example, and a digital otoscope offers a look into the child’s ear — all under the physical supervision of a school nurse.

Then, if the doctor makes a diagnosis, parents can pick up their child’s prescription from the pharmacy on their way home from work, said state Rep. Jodie Laubenberg, a Republican of Parker and the bill’s author.

“You don’t have to take off work,” she said. “He doesn’t have to leave school. It’s less disruptive.”

Texas is not the first state to pay doctors for school-based telemedicine for Medicaid patients. Georgia and New Mexico have similar laws on the books, according to the American Telemedicine Association.

Laubenberg said she wrote the bill to support programs like one put on with Children’s Health hospital system in North Texas. There, children from 27 grade schools in the Dallas-Fort Worth region have electronic access to three health care providers — one doctor and two nurse practitioners — while school nurses sit in on the visits. A spokesman for Children’s said the program will soon expand to 30 more schools.

In that program, school nurses — health care workers who don’t necessarily hold a nursing degree — can examine children, and, if they have an apparent health problem, send their information to Children’s to schedule an appointment. The program is currently funded by a five-year pot of mostly federal money.

Children’s says the new law will allow its program to remain financially viable when that funding source goes away, and allow similar programs to take hold across the state.

“Children’s Health in our programming is not going to be the [primary care provider] for every kid that walks through the door, so in order to sustain the program, we needed to be able to bill for that service,” said Julie Hall Barrow, senior director of healthcare innovation and telemedicine for the hospital system.

Other programs may follow suit. Texas Tech University’s medical school has partnered with the school district in Hart to run a school-based telemedicine clinic for more than a decade. That, supporters say, has expanded access to health care in the rural community north of Lubbock.

“Ninety percent of what you would see in a general pediatric clinic, we can handle it by telemedicine,” said Richard Lampe, chairman of the Department of Pediatrics at the Texas Tech University Health Science Center. He said that included sports injuries, strep throat — and among middle and high school students especially, mental illnesses like anxiety and depression.

But there are still questions under the new law about how schools will decide which students are eligible to have virtual doctor visits. The state will only pay doctors for seeing kids if they’re enrolled in the Medicaid program.

“I think the question goes to, what happens if the kid gets sick and they don’t have Medicaid?” said Quianta Moore, a researcher at Rice University’s Baker Institute for Public Policy, who has written about school-based telemedicine.

That could raise questions about equity and access, Moore said, because doing “health intervention in school is actually very effective.”

“You’ll end up sometimes with a doctor that’s not adequately informed as to the patient’s history or allergies,” said Lee Spiller, the policy director for the Texas branch of the Citizens Commission on Human Rights, a nonprofit mental health watchdog. “How can you expect a kid to really be aware of risks, their allergies, medical history?”

Spiller also said he worried parents who signed blanket consent forms at the beginning of the school year would not fully understand what they were signing their children up for.

In Dallas, at Uplift Peak Preparatory, health office aide Ruby Jones said some parents chose not to sign consent forms, but if their children got sick and came to visit her, she would try to talk to them about the “amazing tool” of telemedicine.

Said Jones: “There’s nothing more rewarding when … you see a scholar walking down the hall and they say, ‘Thanks, Ms. Jones. I feel better.'”

Throughout August, The Texas Tribune will feature 31 ways Texans’ lives will change because of new laws that take effect Sept. 1. Check out our story calendar for more.