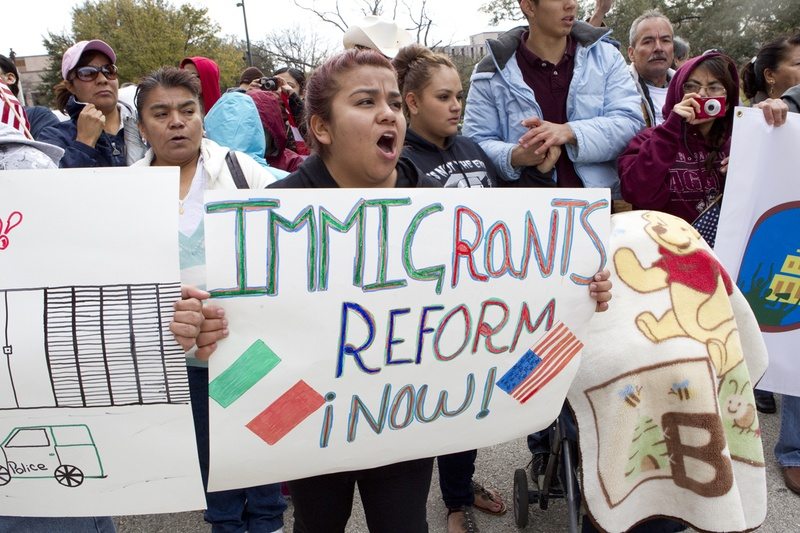 A watchdog group is suing the agency charged with protecting the state’s most vulnerable Texans, alleging the department fast-tracked a policy change that might help the federal government convince a federal judge to reverse her order shutting down two immigration detention centers in Texas.

The lawsuit by Grassroots Leadership, a non-profit group opposed to for-profit prisons, filed in a Travis County state district court, claims that by adopting an emergency rule in September, the Texas Department of Family Protective Services can issue temporary licenses to privately run detention centers in Karnes City and Dilley without publicly detailing how it will ensure the safety and well-being of the immigrants.

The detention centers house as many as 2,000 undocumented women and children that were part of the surge of unauthorized migration that began last summer, when tens of thousands of families from Central America illegally crossed into Texas. The Geo Group operates the center in Karnes City, and Corrections Corporations of America operates the facility in Dilley, under contracts with U.S. Immigration and Customs Enforcement.

The emergency rule created a new category of state facility: the family residential center. The detention centers have applied for the designation and, if licensed, might come closer to complying with a judge’s order mandating that the immigrants be held in an appropriate setting, attorneys for the immigrants said.

In July, U.S. District Judge Dolly Gee ordered the immigrants released as soon as possible because their detention violates the provisions of a 1997 legal settlement — the Flores v. Meese agreement — which requires that undocumented juveniles be held in the places that protect their overall well-being. In her ruling, she declared conditions in the detention centers “deplorable.”

“The court determined that while detained by [Immigration and Customs Enforcement], families must be in state-licensed facilities to provide ‘essential protection of regular and comprehensive oversight by an independent child welfare agency,’” department spokesman Patrick Crimmins noted in an agency fact sheet. “Although the ruling did not require DFPS to license the facilities, it did highlight a gap in the oversight of the children at these types of facilities. The new DFPS rule closes that gap by requiring state licensing.”

Gee gave the Obama administration until Oct. 23 to comply with her ruling, but the government has appealed to the U.S. 9th Circuit Court of Appeals.

The licenses would bolster the government’s claim that the detention centers comply with the law, said Amy Fischer, policy director for Refugee and Immigrant Center for Education and Legal Services. Gee could still find the centers out of compliance, Fischer said.

“We believe this is simply a case of a state agency being bullied by the federal government to help them win a court battle to continue the detention of mothers and children seeking asylum,” she said.

Critics of the licensing process say they weren’t given a chance to highlight problems at the centers.

If licensed, the agency’s Residential Child Care Licensing division will be able to inspect the centers and investigate allegations of wrongdoing or abuse, Crimmins said.

Advocacy groups argue that licensing would perpetuate the abuse and neglect Gee said was rampant in the facilities.

“It is simply not possible for DFPS to regulate or license family immigration detention centers without skirting the rules that it normally requires facilities to follow in order to ensure the health and safety of children,” a coalition of immigrants’ rights and civil liberties groups wrote to Gov. Greg Abbott and agency Commissioner John Specia last week.  “To the extent that DFPS seeks to hold the family detention centers accountable for the safety and well-being of its child residents, we applaud its laudable goal. The licensing approach, however, is unnecessary and unwise.”

The Geo Group denied any allegations of abuse or other wrongdoing.

“The Karnes County Residential Center provides high quality care in a safe, clean, and family friendly environment, and onsite ICE personnel provide direct oversight to ensure compliance with ICE’s Family Residential Standards,” Pablo Paez, the company’s vice president of corporate relations, said in an email. “Our company has consistently, strongly denied allegations to the contrary. Earlier this year, the findings of a comprehensive investigation conducted by the Office of the Inspector General corroborated the unfounded and unsubstantiated nature of prior allegations.”

The Corrections Corporation of America said the company’s application signifies it is able to adapt to the changing detention needs of the federal government.

Crimmins declined to discuss the lawsuit but said the licensing process was thorough.

“The process involves a comprehensive inspection of both facilities to determine if they meet minimum state standards for residential child-care operations, public hearings that must be conducted by the facility operators, and a series of unannounced inspections,” he said in an email. “Temporary licenses will be issued initially, then, if appropriate, permanent licenses can be issued.”