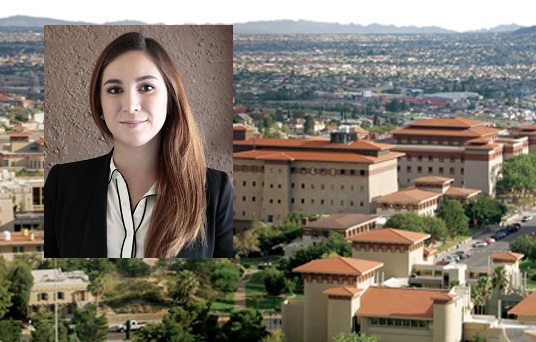 While Alvelais excelled in academics and extracurricular activities, she also worked at one of El Paso’s major law firms, served as a judicial intern, and participated in numerous community service activities.

“We selected Perla based on her accomplishments,” said Monica L. Perez, president of the EPYLA and an attorney with Mounce, Green, Myers, Safi, Paxson & Galatzan, PC. The firm, which employs Alvelais, nominated her for the Harbour award.

Alvelais, a native of Juárez, Mexico, praised UTEP for its commitment to diversity, inclusivity and student success. She said the University prepared her for internships, scholarships, employment and community involvement. She was especially grateful for UTEP’s Law School Preparation Institute.

“The work done by the institute’s professors and staff gave me and many students the opportunity to rank into the nation’s top law schools,” Alvelais said.