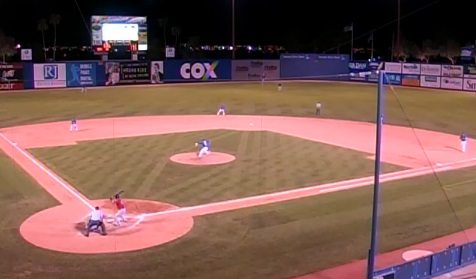 The El Paso Chihuahuas hit three home runs and beat Las Vegas 10-1 Thursday to hop over the 51s into first place in the Southern Division.

The Chihuahuas have a half-game lead with five games remaining in the regular season, while Las Vegas has four games left.

Rymer Liriano, Jake Goebbert and Will Middlebrooks all homered and all had three hits Thursday. The Chihuahuas loaded the bases with no outs in both the sixth and seventh innings and produced three runs in both frames.

Starter Daniel McCutchen allowed one run in seven innings of work. El Paso pitchers held Las Vegas to only two runs over the final 22 innings of the series.

Las Vegas used eight pitchers Thursday, including five between the fifth and seventh innings. El Paso travels to Reno for the final series of the regular season, while Las Vegas hosts Tacoma. The Chihuahuas won 10 of the 16 games against the 51s in 2015.