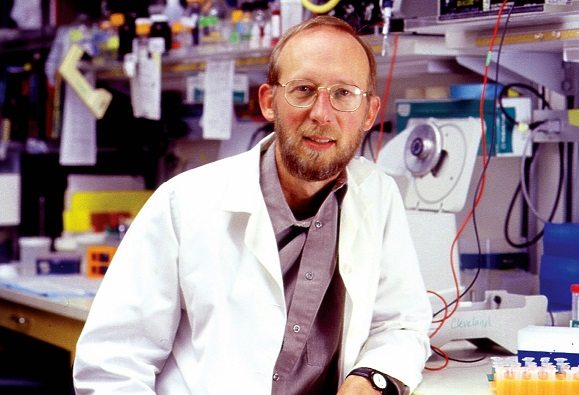 A Las Cruces native and field-leading researcher in the areas of cancer genetics and neurosciences will give a talk at New Mexico State University about breakthrough discoveries that could impact future treatment of diseases such as Lou Gehrig’s disease, Huntington’s disease and Alzheimer’s disease.

Don W. Cleveland, a professor and chair of the Department of Cellular and Molecular Medicine at the University of California at San Diego as well as a member of the Ludwig Institute of Cancer Research, will return to NMSU on Monday, May 1, to share insights about his research with students and the community.

Cleveland will spend the day meeting with different groups, touring the campus, talking with NMSU students in biology, chemistry and physics and giving a public lecture about his research titled “Gene silencing therapy for human neurodegenerative disease,” which will begin at 3:30 p.m. in the Domenici Hall Yates Auditorium, Room 109.

“It’s a real pleasure to visit NMSU and Las Cruces again,” said Cleveland, who graduated from Las Cruces High School and earned a bachelor’s degree from NMSU in physics in 1972. “They gave me a great start in my scientific career and made me into a lifelong New Mexican (no matter where I live).”

Cleveland initially identified tau, the protein that accumulates abnormally in Alzheimer’s disease. It is also the protein whose misfolding underlies chronic traumatic brain injury, which is now receiving nationwide attention from the National Football League.

“We are proud to welcome Dr. Cleveland back to NMSU,” said Enrico Pontelli, interim dean of the College of Arts and Sciences. “This is part of our Alumni Connections series, which seeks to connect our Arts and Sciences alumni with our students. One of the keys to students’ long-term success is the connections they build, not only with their professors and fellow students but also with alumni like Dr. Cleveland, who are leaders in their field of study.”

Cleveland has earned numerous awards for his work. Among them, three National Institutes of Health Merit Awards, the Wings Over Wall Street MDA Outstanding Scientist award and The Sheila Essey Prize from the ALS Association and American Academy of Neurology as well as the Judd award from Memorial Sloan-Kettering Cancer Center.

NMSU biology professor Brad Shuster remembers Cleveland as a mentor when Shuster was a graduate student. He also invited Cleveland to NMSU for a seminar several years ago.

“Don has made enormous contributions to our understanding of the basic structure and function of cells, and has lent profound insights into pathologies such as cancer and neurodegenerative diseases,” said Shuster. “His leadership has extended well beyond the bench, serving as president of the American Society for Cell Biology and an editor of our discipline’s top journal. Plus, he’s a great guy and one of the most successful scientists NMSU has ever produced.”

Pontelli believes Cleveland’s engagement with NMSU students one-on-one will be just as valuable for them as the knowledge of his cutting-edge research.

“This is an amazing opportunity for our faculty and students,” Pontelli said. “We are fortunate Dr. Cleveland is making the time to share his research and insights.”

Cleveland’s lecture is free and open to the public. Campus parking passes for visitors are available at http://auxadminforms.nmsu.edu/ParkingForms/ePermit.aspx.