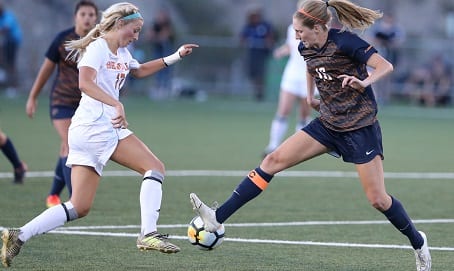 “Our girls battled so hard tonight, playing a man down for nearly the entire game and overtime against a very good LA Tech team,” UTEP head coach Kevin Cross said. “We had some good counter attacks and set piece opportunities that did not go in. The LA Tech coach [Kevin Sherry] told me after the game that our girls deserved better tonight. We will win most games with this excellent effort. Caley Leask was phenomenal in goal tonight. I am very proud of the girls.”

Making her first start of the season, Leask manned the defense for the Miners in front of goal. The sophomore was called into action early in the game, getting a slight deflection off of a shot from the Lady Techsters to keep the score knotted at zero. Leask made four saves on 14 shots faced in the opening half.

In the 15th minute, junior Lauren Crenshaw was issued her first career red card. The Miners played the remainder of the game down to 10 players. She will miss the next contest against Southern Miss on Sunday.

The short-handed Miners struggled to find their offensive groove, but managed to keep the game tied at the break.

UTEP continued to remain defensively strong, as Leask once again was called upon in the first two minutes of the second half. The Canada native recorded a crucial save in the 49th minute on a shot by LA Tech’s Mylene Roy-Ouellet.

Danielle Carreon and April Pate were able to string together a couple of attacking opportunities for the Miners. Carreon had her shot blocked in the 65th minute. Pate followed the rebound with a shot of her own, putting the ball just over the crossbar.

The Lady Techsters continued to pressure the Miners with a barrage of shots at goal, tallying a total of 11 to close out regulation. Barker was finally able to find the breakthrough in the opening minute of overtime.

The Miners will return to action on Sunday with a road trip to Southern Miss slated for 11 a.m. MT.