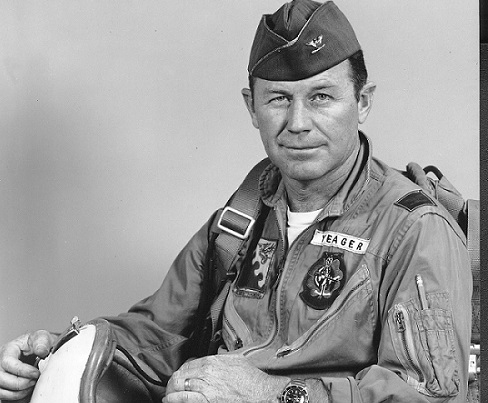 Gen. Chuck Yeager was an inductee during the sixth annual Space Hall of Fame ceremony, and attended the event held in Alamogordo. He was a member of the panel that investigated the 1986 Shuttle Challenger disaster.

The New Mexico Museum of Space History and International Space Hall of Fame were saddened to learn of the passing of General Chuck Yeager on Monday, December 7, 2020.

A 1982 Inductee into the Space Hall of Fame, Yeager is best known as the legendary test pilot who became the first man to break the sound barrier flying the Bell XS-1 rocket research plane on October 14, 1947. He was only 24 at the time, and suffering from two broken ribs that he’d gotten horseback riding the day before.

Yeager was born on February 13, 1923, in Myra, West Virginia. He was the second son of Albert Hal and Susie Mae Yeager. He enlisted in the Army Air Corps in September 1941 at the age of 18. During WWII, Yeager flew 64 combat missions and had 12.5 aerial victories. On his eighth combat mission, he was shot down over France, where the underground helped him avoid capture and return to the skies.

After the war, Yeager was stationed at Wright Air Force Base where his flying prowess put him in the front row for airshows, then later became a premier test pilot for the Air Force which landed him the opportunity to fly the X-1, named “Glamorous Glennis” after his wife.

Yeager retired from the Air Force as a general on Feb. 28, 1975. On Sept. 21, 2007 he commemorated the sixtieth anniversary of his feat, breaking Mach 1 again while piloting an F-16. The event also commemorated Yeager’s 65 years of piloting military aircraft.

On his 89th birthday, Texas journalist Bob Crowley summed up Yeager’s service (quoted on chuckyeager.com): “He could have retired to the private sector in the 1950s, but didn’t. Instead he was sent to Europe, and assigned to a squadron that would have made a one-way flight with nuclear bombs if war had broken out. Again, in the 1960s, when he could have retired and spent his time doing endorsements, serving on corporate boards and having a comfortable life, he didn’t. He went to Southeast Asia during the Viet Nam war to lead a group of attack-bombers. He flew more than 100 missions personally. Instead of choosing wealth and comfort, he chose to serve his country.”

Yeager was been awarded numerous accolades for his flight achievements. President Harry Truman presented him with the Collier Trophy, and President Dwight Eisenhower the Harmon International Trophy. President Gerald Ford feted Yeager with the “Peacetime Congressional Medal of Honor from the Congress of the United States.

The New Mexico Museum of Space History, located in Alamogordo, New Mexico, is a Smithsonian Affiliate and a division of the NM Department of Cultural Affairs. For more information, call 575-437-2840 or toll free 1-877-333-6589 or visit their website or like their Facebook page