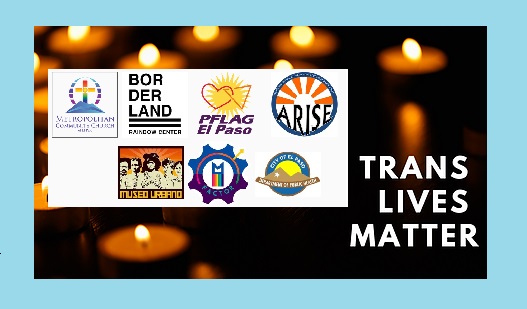 On Friday evening, November 20, 2020, the LGBTQ community and its allies will join together virtually to memorialize and celebrate the lives of the transgender individuals who have passed since last year’s remembrance.

A broad coalition of organizations representing the LGBTQ community and its allies plan to participate in the virtual service.

The Borderland Rainbow Center, PFLAG El Paso, ACLU Texas, Temple Mount Sinai, Metropolitan Community Church of El Paso, A.R.I.S.E. at UTEP, and the Department of Public Health of the City of El Paso invite the public to join in memorializing the transgender lives lost this past year to violence in the United States.

According to GLAAD, Transgender Day of Remembrance (TDOR) was started in 1999 by transgender advocate Gwendolyn Ann Smith as a vigil to honor the memory of Rita Hester, a transgender woman who was killed in 1998.

The vigil commemorated all the transgender people lost to violence since Rita Hester’s death, and began an important tradition that has become the annual Transgender Day of Remembrance.

“Transgender Awareness Week culminates with Transgender Day of Remembrance on November 20. On that day, we lift up and honor the memories of the transgender people whose lives were lost to anti-transgender violence in that year and in previous years. So far, at least 34 transgender people have been killed in the U.S. this year, including at least two in Texas: Merci Mack in Dallas, and Helle Jae O’Regan in San Antonio,” Adri Perez, a local trans advocate, shared.

“Although holding space to honor the lives of those lost to violence is a reminder of the dangers still faced by the transgender community, it is also a day to celebrate the trans people that are still living. This week is about celebrating the power, love, and resilience that all trans people hold to build a better, gender-affirming, world – one free from discrimination and attacks at the social, political, and legal level.”

El Paso County’s Commissioner’s Court recently reaffirmed its commitment to honoring the lives of transgender individuals by introducing and accepting a resolution recognizing Transgender Day of Remembrance 2020, as well.

Introduced by Commissioner David Stout and unanimously accepted by the entire court, the LGBTQ community of El Paso applauds the compassion and understanding that the health of our community is measured by how we treat our most vulnerable members.

Transgender individuals, especially women of color and Black women are at a higher risk for gender- based violence and abuse, sometimes resulting in their deaths,” BRC officials shared. “Compounding the tragedy, these individuals are often misgendered by the media after their death due to misunderstandings, both intentional and not, about the individual’s identity.”

Officials add that “misgendering a person after their death is also an act of violence, and the media can play an important role by taking every opportunity to correct misinformation.”

This training is free for students and the general public, and costs $50 for 5 CEUs.