Dolores Huerta is synonymous with Mexican/Mexican American history in the United States; and to know her story, is to know a piece of our own cultural identity.

I have been fortunate enough to have met the civil rights activist, co-founder of the United Farm Workers, on a couple of occasions and each time I find myself completely enveloped by her magnetic presence.

This was the case when I sat down with the icon herself for our interview.

“Don’t I know you, you look familiar” she says.

(Oh my God, Dolores Huerta actually recognizes me! I could barely contain my excitement!)

I maintained my professional decorum and reminded her of where and when we last saw each other, we laugh together over that private moment and instantly I feel at ease sitting with the living legend.

I thanked her first and foremost, for visiting us in the Sun City and she replied, “Oh are you kidding me, I love El Paso, my grandmother was born in Las Cruces, I have a lot of family in the area.”

So make no mistake folks, Dolores (having also been born in New Mexico) is a fellow sister of the Southwest.

We had so much to discuss and such a short amount of time. I know she is often asked the same questions, so I wanted my time with her to be a little different, I wanted to pull from her wisdom and strength knowing that because of her (and women like her) who fought during the Women’s Movement of the 60’s, our generation now has many of the rights and freedoms that they didn’t have.

Q: How can we, this next generation of activist, take it to the next level, honoring the path the women before us have paved?

Huerta: You know I think it’s already happening. I travel all over the country and since the election I’ve seen young women that are upset, angry, and ready to fight, they are stepping up and all over I see them running for office…and winning! That’s really what it’s going to take. We are now what, in October? And look at what we have done, we have stopped a lot of really terrible things from happening, and that has all been through the efforts of young people and women, calling their senators, congressmen; organizing, marching, we have influenced change. So we see that it works, we just gotta keep doing more of that.

Q: One of the common things that I have encountered are folks that are repentant of not voting or not having done more, what can you tell that person that maybe didn’t care and now really cares?

Huerta: What I tell everyone is, the people that we elect, making decisions that affect our lives every single day, even the way they spend our tax dollars, they are the ones that decide where our money is going to go – whether it goes to schools, or for jails, or whether it goes into the pockets of the greedy; and we can prevent that, it’s really easy, by voting.  Not everyone is going to be ready to go out and fight but start small, if you care about school systems, look into the education board votes, start there. For me it was calling, I knew I wanted to fight the social injustice happening to the farm workers. The point is to engage, on any and every level, big or small.

My introduction to Dolores began a long time ago. I have always given credit to the amazing professors from UTEP (Dr. Meredith Abarca, Dr. Yolanda Leyva, Dr. Lee Ann Westman, to name a few) who taught/teach ‘special topics’ and awoke my social consciousness back in 2006.

Since then, throughout my life and career, I have carried their teachings and anyone who knows my professional background can attest that (they) truly impacted the direction of my life.

Early on in my search for cultural identity, one of my professors assigned CHICANO: The History of the Mexican American Civil Rights Movement, which turned out to be a defining book for me. Until that moment I really had not been educated on what our struggles as a people have been, in the United States.

It would during this period that I would first hear the name, Dolores Huerta.

The film, DOLORES, focuses on what history has left out. As is the tradition with many notable women, their place is often written out of the textbooks, often being left in the shadows of a male counterpart.

We see this time and time again, so much so, that the term ‘Herstory’ was created to honor the contributions of women who have been erased or overshadowed. For those of us that are social justice warriors, we know exactly what Dolores means to the movement.

Watching the film the other day – now that I have lived a little longer, as a woman (of color) in the world, now living in a Trump era – I have a completely new level of profound respect and admiration for all that Dolores has done for us.

I acknowledged and respected her role before, but I don’t think I fully grasped it, on a personal level.

Now as I have sat in board meetings and had my voice “ssh” by male colleagues, at times having to fight for my place as the only female, or working towards a common goal, having my ideas applauded yet watching my male boss/colleagues get all the credit…I understand Dolores a little more.

Now feeling guilt for not having had children and thinking maybe I have been selfish and “too” dedicated to my career; yet watching Dolores’ 11 children talk on screen at how painful it was (at the time) not being able to always have her around, sharing her with the world, the sacrifice that not only she, but her children also made, to the movement…I understand Dolores a little more.

Now that I have worked on a presidential campaign, having fought so hard for my community, standing on the right side of justice, yet facing an uphill battle…I understand Dolores a little more.

I found myself tearing up at different points during the film, it was so poignant, relatable, filled with herstory, the struggle of our people, yet at the same time giving me great hope of what we can accomplish by working together.

Q: At 87 (and a half, as she corrected me) Dolores is still full of energy, fight and vigor. I asked her what keeps her so focused and motivated?

Q: I compare the UFW grape boycott to what we are facing now, to go up against the grape growers who had the backing of the government, meanwhile the UFW was fighting for the rights of the people in the fields, it must have seemed impossible, were there moments you had doubts that you would win?

Huerta: Never. We always knew we would win, because we weren’t going to ever give up. It was just a matter of time. You can’t give up, that’s the only thing, if you give up then you aren’t going to win.

Even now, I know we are going to win against this administration. That’s why I am doing all this, going all across the country, so I can tell people, get inspiration from this film, engage, go out there and get people to vote.

Q: Will we see a female president?

Huerta: Absolutely. It will happen.

We talked a little more, I asked her some random questions as well, favorite show, music etc…but as we wrapped up, it was her response to my final question that encompasses exactly what Dolores Huerta is all about.

Q: Do you realize that you are an icon, has that reality set in over the years, or is everyday still like any other day?

Huerta: It’s like my son says, it’s not about being an “icon” it’s about “I CAN!” It’s about the people and together, we can. Sí se puede. 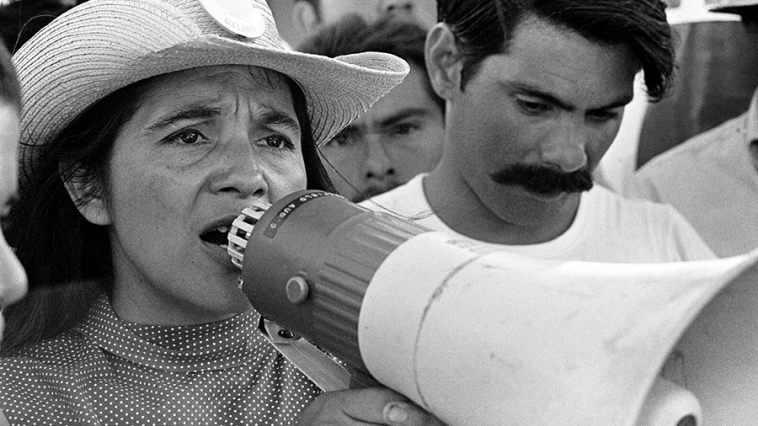