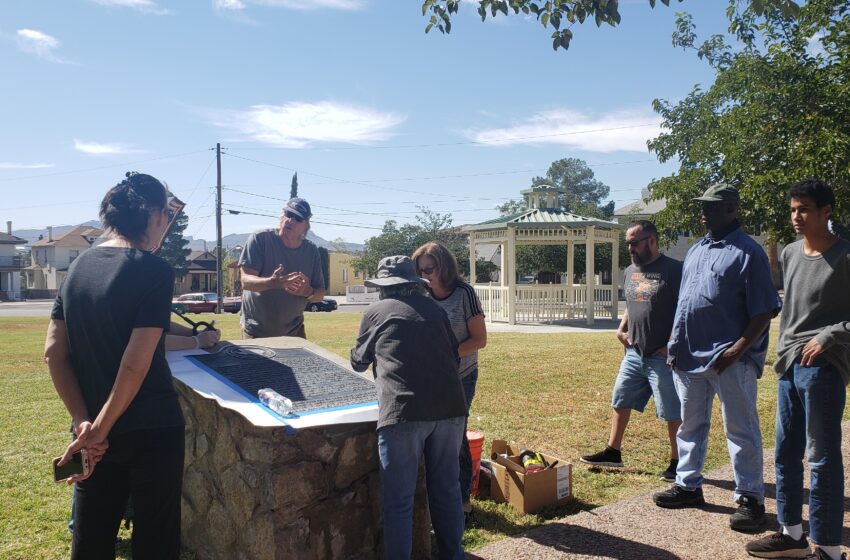 To honor the anniversary of DAR’s founding on October 11, 1890, chapters and individuals are encouraged to engage in meaningful service projects in their communities each year on or around October 11th. On October 17th, 2021 the chapter worked with the El Paso Community Foundation to restore a marker using the Texas Historical Commission’s guidance. This is the second marker the chapter has restored and they plan to restore many more in the city.

Chapter members, family, and guests came out to the Sunset Heights District in historic El Paso. Construction of the subdivision began in 1884 and continued until 1920, where “it was home to a diverse ethnic population, including wealthy former citizens of Mexico, prominent Anglo-Americans, and many Jewish families.”

The historical marker commemorates the first planned residential subdivision in the country, which was named in a newspaper contest and includes works of prominent Architects, such as Henry Trost.

Over thirty years, Trost created some of the most unique buildings in the southwest utilizing the landscape and the climate in all his designs. “Henry’s architectural styles ranges from prairie style (seen in the design of his home in El Paso), Mission Revival (featured in the First Owl Club in Tucson), Pueblo Revival (Franciscan Hotel in Albuquerque), Bhutanese design (University of Texas at El Paso) and the Chicago Art Deco (Bassett Tower in El Paso).” (from www.henrytrost.org)

Members were elated to participate and really enjoyed this Historic Preservation project. The Stoddert-del Norte Chapter members would like to thank Gary Williams of the El Paso Community Foundation for helping them with this project and their significant others for always supporting them and the chapter (even though they mainly stand around telling war stories and socializing!)