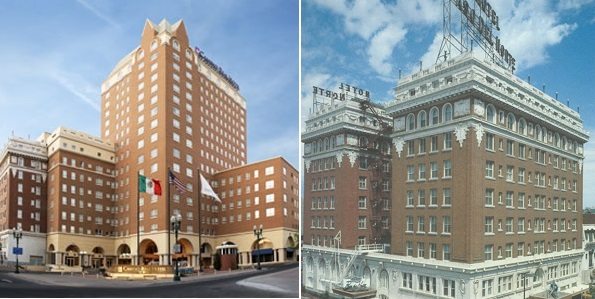 The Hotel Paso del Norte, one of the most important historic buildings in the Southwest, will be renovated and restored as part of a plan announced Tuesday by local developers, Meyers Group and Two Sabes LLC.

The hotel has been operated as the Camino Real Hotel by Grupo Empresarial Angeles of Mexico City. The hotel is located at 101 South El Paso Street in Downtown El Paso.

During Tuesday’s City Council meeting,  Council approved a term sheet that will allow City staff to move forward with the incentive process for a private redevelopment project that will revitalize the historical downtown Camino Real Hotel into a convention hotel.

“Since opening in 1912, the Hotel Paso del Norte has served as an iconic landmark welcoming visitors to Downtown El Paso,” said Josh Meyers, Vice President of the Meyers Group. “We are humbled to help this city reclaim its place as the premier city in the American Southwest by breathing new life into this architectural treasure.”

The term sheet not only allows staff to develop a 380 agreement with the private investor, Meyers Group Acquisitions, but it allows the investor to begin work on this redevelopment project.

“This revitalization project has been a long time coming,” El Paso Mayor Oscar Leeser said.  “I’m proud to say that this is not only a City initiative, but an initiative that includes our partners at the County and State level. This project is going to be key to our redevelopment efforts of downtown and is definitely a catalyst for our continued economic growth here in the El Paso region.”

“While this project signifies the importance of El Paso’s rich history, it also signifies the optimism we all feel about El Paso’s future,” Meyers said. “Significant Downtown investments — both public and private — have created an environment in which projects like this one make good business sense for investors and developers.”

The hotel, which sits in the heart of downtown, is expected to see a $70 million renovation and transformation into a much garnered convention hotel. The City of El Paso, the County of El Paso, and the State of Texas are anticipated to assist in this redevelopment project by providing incentives totaling $34 million in State and local taxes.

“A lot of hard work with a strong team has taken place to make this project a reality,” said City Manager Tommy Gonzalez. “This project includes a return on investment clause that pays the City a percentage of the net profits in perpetuity. When completed, the convention hotel will bring even greater opportunities to our already thriving downtown.”

The Hotel Paso del Norte was designed by architect Henry C. Trost and built by Zachary T. White. When it opened in 1912, construction

The hotel was added to the National Register of Historic Places in 1979 and features a 25-foot- diameter stained glass dome reputedly created by famed American artist Louis C. Tiffany.

A final incentive agreement is expected to be brought back to the El Paso City Council in September for approval.