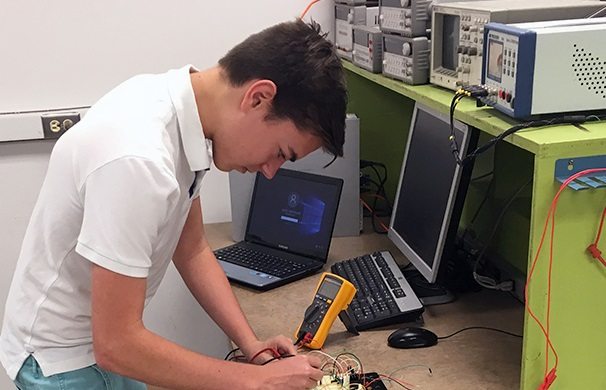 A Mayfield High School student gained research experience this past summer by working with graduate students in the Electrical and Computer Engineering Department in the College of Engineering at New Mexico State University.

Jacob Hammond, a senior this year at Mayfield, and he said he already knows he wants to major in electrical engineering at NMSU. He first got involved with NMSU after Electrical and Computer Engineering Department Head Satishkumar Ranade gave a presentation at Mayfield.

“I talked to Dr. Ranade afterward,” Hammond said. “I asked him about internship opportunities.”

Hammond has participated in research in many of the college’s departments, per Ranade’s desire for Hammond to gain experience in a wide array of engineering fields.

“I started out working in the Power Lab on a circuit and I learned how to code in several different coding languages,” Hammond said.

By these projects, Hammond said, he contributed to graduate students’ research projects.

From the Power Lab, Hammond transferred to the Nano-satellite Lab.

“I put together an LED-sun simulator so that the lab could test its solar panels,” Hammond said. “I designed a test stand for them to test their satellites.”

Such test stands are integral for satellite design, as satellites must be oriented in space in order to be effective but a zero-gravity environment cannot naturally be found on Earth. Thus, a test stand simulates a weightless environment and allows for extrapolation.

“I’ve been working with Python and big-data management, helping one of their summer research teams,” Hammond said. “I also became part of the Electric Power Systems for the Inca nano-satellite. I’ve been working really close with them developing code and testing their curve-tracer project.”

Though he had been pretty sure he wanted to major in electrical engineering in college, Hammond said his summer in the College of Engineering has cemented his plans.

“Seeing how electrical engineers get to build their hardware and then write code to work with it is really cool,” Hammond said.

In his senior year of high school, Hammond said he hopes he can ignite passion for engineering in other young students’ minds.

“I definitely think what I’ve learned here I can bring back to my high school,” Hammond said. “I want more kids to get interested in engineering.”