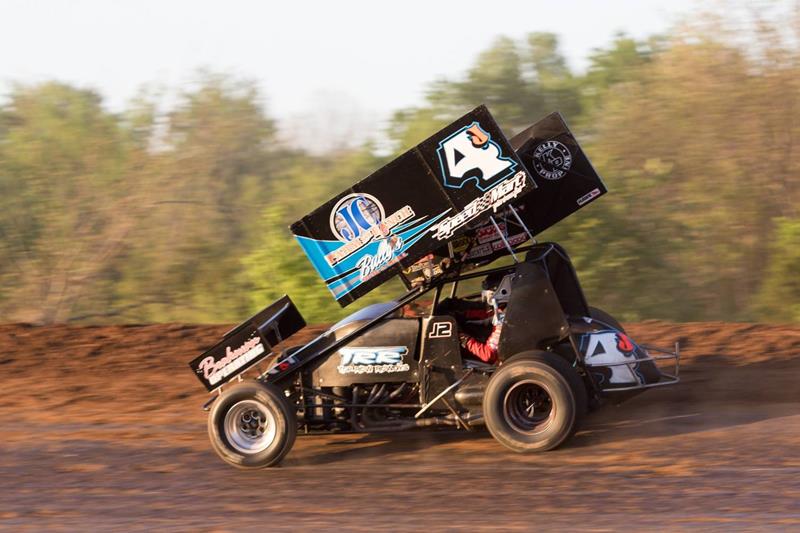 An up and down weekend for John Carney II ended on a high note as the driver of the John James Racing No. 4j posted his 10th podium finish of the season at the Golden Triangle Raceway Park in Beaumont, Texas with the Griffith Truck and Equipment ASCS Gulf South Region presented by Southern Trailer Works.

Starting on Friday at the Heart O’ Texas Speedway however, things did not end as Carney had intended.

“We ran well through the heat…we went fifth to second but the car was tight. It was way to tight, but still, we were in the redraw and I drew the five. For the feature, we freed the car up a lot. We changed the bars, moved the tires out, added air, and it seemed the like the track went from heavy to super heavy,
said Carney.

“The track was three times what it was so what we did still wasn’t enough. We were really just riding around in fifth or sixth when I pushed and when I did, the No. 51 tried jamming in there and ended up his right rear went over my left front and when he did it peeled my nose wing off, caught the top wing, and he flipped but it ended up my night.”

Able to repair the damage, the team moved south to the Golden Triangle Raceway Park where Carney began his night with a Heat Race win.

“We made the redraw again and we were running second in the feature and I felt like I was starting to catch Aaron [Reutzel] a little bit. He got caught in traffic a couple times and I made up a lot of ground on him. I was running the top and about the time I felt like I could get a run on him, Channin Tankersley drove past me through the middle. I saw he had the wing pulled back, so I adjusted mine and tried to run with him, but his car was good. He caught Aaron, passed him, and drove off.”

Crossing third on the track, Carney would end up second after Aaron Reutzel was disqualified for unsportsmanlike conduct according to the ASCS press release.

Coming up next for John Carney II and the MVT/John James Racing No. 4j will be the Texas World Dirt Track Championship at the Texas Motor Speedway Dirt Track on Friday, May 13 and Saturday, May 14. A November race in 2015, Carney nearly took the win away from Seth Bergman, but ended up having to settle for a runner-up finish.

The John James Racing team would like to welcome Challenger Drilling as a partner on the No. 4j machine for the remainder of the 2016 season. Challenger Drilling has been a longtime supporter of Sprint Car racing across the state of Texas and currently helps provide a $1,000 bonus to any driver who can sweep a weekend with the ASCS Gulf South Region.

For continued updates on John Carney II and the John James Racing No. 4j, fans can follow along on Facebook.