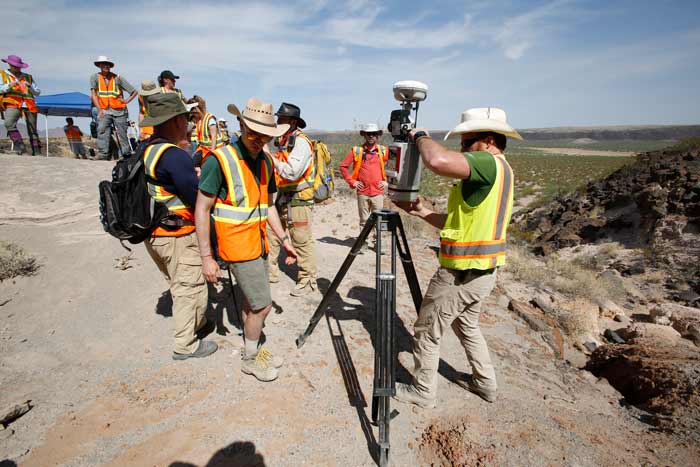 Residents in West Texas and Southern New Mexico may not be aware of a massive volcanic crater in the area, but Kilbourne Hole is no secret to geologists and NASA researchers from around the nation. The National Natural Landmark is about 30 miles west of the Franklin Mountains and is known as a maar volcano.

“About 24,000 years ago, there was lava, magma that came up from deep within the Earth, and it hit shallow groundwater in the aquifer that was here,” explained Jose Hurtado, Ph.D., professor of geological sciences. “It was a lot wetter back then. That water turned to steam and that steam built up immense pressure, and that pressure was released in a massive explosion that produced Kilbourne Hole. The explosion also threw out pulverized material exposed in layers.”

Mother Nature’s unique imprint in the middle of the desert is what draws Hurtado and other researchers to the massive pit for exploration and research. The location has many rare minerals remaining, including olivine glass granules.

While he usually takes his students on the venture, Hurtado recently guided a group of NASA scientists and engineers, as well as a group of journalists, on a weeklong expedition.

The group is part of the RIS4E program – Remote, In Situ, and Synchrotron Studies for Science and Exploration (RIS4E) – and was in the area to explore different techniques for merging science and space exploration.

“This team brings together a diverse group of scientists and engineers to explore how portable instruments could be used by astronauts in the future,” said Jacob Bleacher, research scientist with the NASA Goddard Spaceflight Center. “The end goal is for us to find the problems with using the instruments here, in an environment where we can come back and test them again. We would like to make sure that the problems don’t come up on Mars or the moon when the astronauts are there.”

The fieldwork had been conducted on the big island of Hawaii, but for the next couple of years, it will be at Kilbourne Hole and nearby small shield volcano Aden Crater.

“This location is a very important place,” Bleacher said. “Analogs, or sites that are similar to what we expect to see on other planets, are a very fundamental part of these test runs for humans going somewhere else in the solar system. UTEP is ideally located near the Potrillo volcanic field, which is where Kilbourne Hole is located. This volcanic field as a whole is ideal to look at because most of the other places we are looking at exploring, like the moon and Mars, they’re very volcanic dominated … So understanding processes that can be studied firsthand here is very important to us.”

“You have to have procedures in place, systems in place, equipment in place ready to go do those things,” Wilmore said. “You can’t just fire that up at the last minute. Even during Apollo it was decades prior that they were doing preparations for what eventually took place on the moon in the late ‘60s, early ‘70s, and that’s exactly what we are doing now: getting prepared for what could happen decades from now.”

To date, Wilmore has logged 178 days in space and has completed four space walks. He completed his first flight as pilot on STS-129, the final space shuttle crew rotation flight to or from the space station; served as flight engineer aboard the International Space Station for Expedition 41 and then as commander of Expedition 42. He was on the ground for the research at Kilbourne Hole.

“I think the first time I saw it, I thought about landing and we picked a good spot, just from the visual of it,” Wilmore recalled about his first impression of the crater. “There are so many different layers. It’s very interesting to see places like this and then come in here and assess how it all got here.”

According to the Bureau of Land Management, Kilbourne Hole measures 1.7 miles long by well over a mile across, and is hundreds of feet deep. Wilmore and the team used various parts of the crater for testing and simulations. The astronaut said it is important to have a diverse group that includes students.

“You don’t have a small group of people do great things, it takes a nation,” he said. “Having these students and some journalists out here – it’s a training ground for them to do what they are passionate about. The thought of space travel has inspired us for generations and it does these young folks as well.”

Six of Hurtado’s students assisted with the NASA project. They helped guide members and observed and aided the geology expert with his assignment of flying a drone to collect data.

“I think this is a great opportunity for students to get involved in research like this, make connections and overall get inspired to be part of future exploration,” Hurtado said.

It was the fourth visit to Kilbourne Hole for UTEP doctoral candidate in forensic geology Valeria Martinez, but her first time working alongside NASA scientists and an astronaut.

“To see the similarities [with Mars and the moon], it’s what makes every scientist excited,” she said. “It’s not just a hole, it’s a crater and you can see the science behind it.”

While there is no question the quest was exciting, Martinez said fieldwork is critical for students.

“You can read about it, you can know it theoretically, but you have to be hands-on and see it for yourself,” she said. “You need the field geology in order for students to understand what they’re seeing, what they’re reading, so they can connect the dots.”

Professor Timothy Glotch, Ph.D., of Stony Brook University leads the RIS4E team with the assistance of Darby Dyer, Ph.D., from Mount Holyoke College. Multiple project collaborators involved come from across the nation with diverse backgrounds and strengths. The program is one of nine nodes of NASA’s Solar System Exploration and Research Virtual Institute (SSERVI). Read more about SSERVI online.