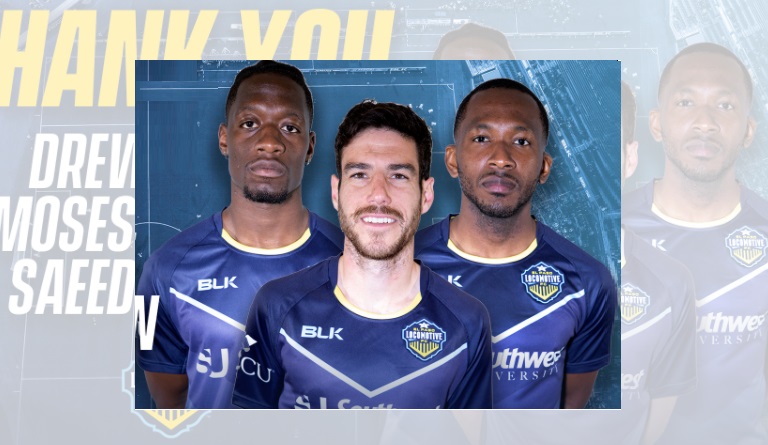 “We would like to thank all three players for their time with El Paso,” said General Manager, Business Operations Andrew Forrest. “They each brought a team-first mentality that helped push Locomotive to a resounding success over the last two years and have helped shape the culture in the locker room. We wish all of them the best and success as they pursue the next stages of their careers.”

Beckie, 30, joined Locomotive FC in May of its inaugural 2019 season, playing an integral part in the success the young club saw through its first campaign. Since signing with Locomotive, Beckie became one of the mainstays on the Locomotive backline, making 18 starts across 22 games played for a total of 1,597 minutes, recording one assist in that time.

A veteran for Locomotive, Beckie’s time in El Paso provided experience to push the team to its successful 2019 playoff run while providing needed depth through the condensed 2020 season.

Makinde, 27, made 19 appearances, 11 of which were starts since joining Locomotive midway through the 2019 inaugural season. With one assist in the inaugural season, Maikinde has helped lift the squad to incredible heights including a second playoff run, providing an important defensive presence when needed in both Conference Final appearances and throughout the 2020 playoff run.

Robinson, 30, joined the Locomotive squad in January ahead of the 2020 USL Championship season, making his debut in the return to play game against Rio Grande Valley FC on July 11. Since his debut, Robinson played 425 minutes across 11 appearances with 6 starts through the regular season. During his run, Robinson recorded three goals including a game-winner against his former club, Switchbacks FC and the brace against Real Monarchs to close the regular season.

“I’ve loved every moment here,” Beckie shared. “We’ve accomplished some special things in the first two years, and I know there will be more. My teammates, the staff, the front office have made everything great and I will miss you all. To the fans, we wouldn’t have this club or sport without you, a sincere thanks for your support. You guys are a part of the success just as much as we are. El Paso will always have a special place in my heart. Stay safe. Vamos Locos por todo.“

El Paso Locomotive FC returns to action for its third season in the USL Championship in 2021! Lock in your seats by going online or calling/texting 915-235-GOAL.