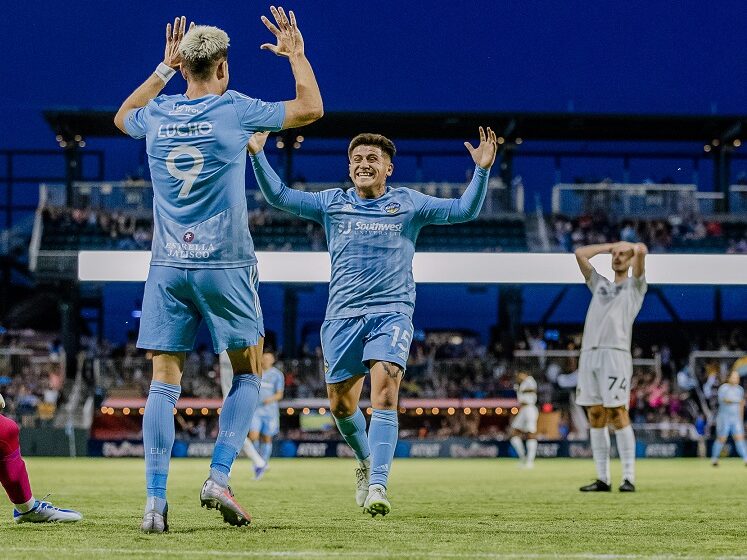 Forward Lucho Solignac scored his fifth goal in three games within a week while Midfielder Diego Luna earned his third goal of the season and Midfielder Eric Calvillo opened his goal-scoring account.

Goalkeeper Evan Newton made six saves to record his second shutout of the season and extend his league records.

“I’m very happy with the week we just had,” commented Head Coach and Technical Director John Hutchinson. “I’m super excited. My happiness comes for the players because they deserve it. They’ve worked so very hard. My happiness comes for my staff who Thursday morning are in here at 7:00 a.m. after we had a game Wednesday night working hard. My staff deserves a lot of credit because they’ve pushed and prodded and I sit back and watch them do their work. Mix them with the player’s attitude and the way they have gone about this week and played. It’s been a joy to sit back and watch.”

Despite LA Galaxy II controlling majority possession throughout the first half, the high press and pressure from El Paso Locomotive led to the Sun City club making the most of their time on the ball.

The Locos opened their goal-scoring count in the 16th minute, with Calvillo earning his first goal from a series of passes sent in from Forward Aaron Gomez and Midfielder Christiano Francois. Just past the half-hour mark, high press from Solignac forced Galaxy II Defender Liam Doyle and Goalkeeper Eric Lopez to make mistakes on the backline to turn an own goal in favor for El Paso. The first half scoring wasn’t finished, however, with Luna capitalizing on an incredible run from Gomez to end the first half with Locos up by three.

LA Galaxy II did have their chances towards goal, testing Newton into making incredible saves, extending his league-leading records while keeping Los Dos off the scoreboard. With tactical changes, Locomotive dominated the second half, sending LA Galaxy II spiraling as in the 63rd minute, Luna used his body to block out a Galaxy II defender to let the ball roll into an open area in the penalty box. Taking advantage, he sent a low pass to Solignac at the center of the box, putting the game to bed 4-0 at Southwest University Park.

UP NEXT: El Paso Locomotive heads back to the East Coast to take on Eastern Conference opponent Pittsburgh Riverhounds SC. The match is scheduled for Saturday, May 14 with kickoff set for 5:00 p.m. MT and will be broadcast live on ESPN+.

Fans can join Locomotive at its Official Watch Party at Union Drafthouse on Sunland Park.

ELP: Eric Calvillo (Aaron Gomez), 16th minute: After a bad clearance from LA Galaxy II, Christiano Francois found himself with the ball at his feet. He crossed the ball across the face goal, getting it to Gomez who took one touch to put it back center. Calvillo was in the right space to provide a simple flick of the right foot to redirect the shot into the net.

ELP: Liam Doyle (Own Goal), 32nd minute: In what was part bad communication on the LA Galaxy II, part pressure from Lucho Solignac, Liam Doyle’s backpass to Eric Lopez ended up going under the Los Dos goalkeeper and into the back of the net.

ELP: Diego Luna (Aaron Gomez), 39th minute: Aaron Gomez cleanly and perfectly stripped the ball off an LA Galaxy II, taking an open run into the penalty area before getting shut down. Instead of trying to take the shot on himself, Gomez lay the ball off to Luna, who took one touch to bury it into the back.

ELP: Lucho Solignac (Diego Luna), 63rd minute: After Dylan Mares took a strike from outside the box that deflected out to the left, Diego Luna expertly used his body to block out the defender, roll the ball around into an open area before crossing his shot to find Lucho at the center of an open net for a final goal of the season.

– Midfielder Eric Calvillo recorded his first goal in a Locomotive jersey, converting a pass from Aaron Gomez in the 16th minute.

– Forward Lucho Solignac scored the final goal of the season making for five goals in seven days and three games.

– Locomotive moves above the playoff line for the first time since the start of the season, leaping over LA Galaxy II with the 4-0 win.

– With the second clean sheet of the season, Goalkeeper Evan Newton extended his league-leading shutout record to 52. Additionally, with six saves, Newton has recorded 500 USL Championship regular-season saves in his career.