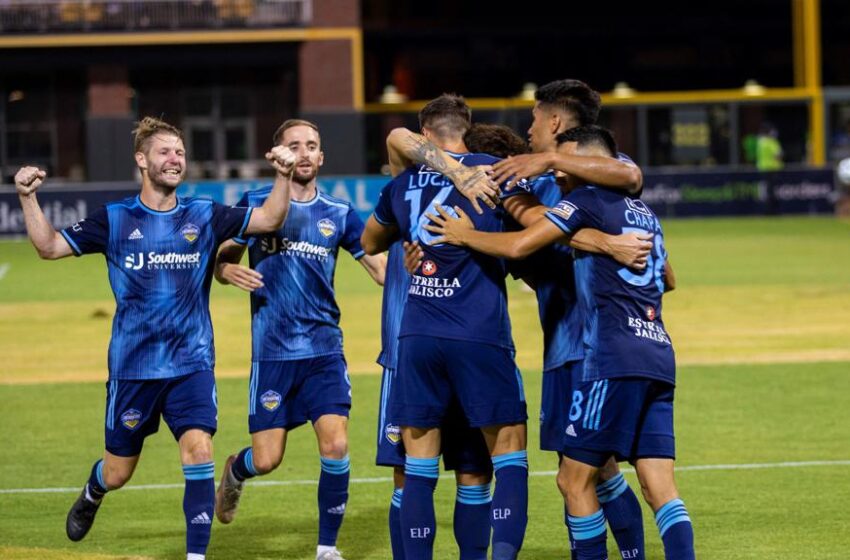 “It’s another Final,” said Head Coach and Technical Director Mark Lowry. “Today was Final #14 of the season against Real Monarchs. On Wednesday, it will be Final #15 of the season against San Antonio. That’s the kind of mentality that we have and that’s how you keep accumulating points across the season which ultimately leads you to where you want to be.”

Saturday’s match kicked off to a  slow opening in the first half that saw neither side with any real opportunities towards goal. For Locomotive the best chance came through Fox who took a chance that was barely deflected and sent wide over.

It wouldn’t be until the 17th minute that Real Monarchs broke the deadlock through Charles Wehan though their lead would not last long. MF Sebastian Velasquez expertly out dribbled his defenders, creating an opening for Gomez to bury one deep into the net for the equalizer in the 24th minute. The two continued to battle through the midfield though the first half ultimately ended even.

As has been the tale of the season, El Paso Locomotive exploded out of the gate in the second half, dominating its visitors from Utah. Lucho, Velasquez, Gomez, and Forward Leandro Carrijo paired expertly in the final third, dismantling the defensive lineup set by former MLS Defender of the Year, Monarchs Coach Jamison Olave.

The pairing ultimately paid off as Lucho recorded his brace tapping in the ball saved by Jeffrey Dewsnap in the 68th minute before doubling it up by rounding the Monarch’s keeper for an open goal in the 81st.

The overall complete performance by El Paso Locomotive earned the full three points in the middle of a tough stretch of games.

Up next, El Paso Locomotive continues its homestand with a rematch against San Antonio FC on Wednesday, August 4. Kickoff from Southwest University Park is set for 7:00 p.m. MT. Tickets are available for purchase online or by calling 915-235-GOAL. The match will also be broadcast life digitally on ESPN+.

SLC: Charles Wehan (Aris Briggs), 17th minute: With quick passing, Briggs picked up the ball, turning it in the box before laying it back into the path of Wehan. Wehan took the opportunity to settle the ball before firing low to tuck it into the corner for the opening goal.

ELP: Aaron Gomez (Sebastian Velasquez), 24th minute: Velasquez broke down the Monarchs’ defense with incredible ball control and dribbling, beating his marked defenders with apparent ease. When the chance opened itself, Velasquez passed the ball into the center of the box where Gomez capitalized with a quick shot deep into the back of the net to equalize.

ELP: Lucho Solignac, 68th minute: Defender Eder Borelli set up a picture-perfect cross to find Lucho at the center of the box. Lucho hit the header into the hands of Monarch’s goalkeeper Jeffery Dewsnap but cleaned up the deflection with a right-footed shot into the back of the net.

ELP: Lucho Solignac (Nick Ross), 81st minute: Lucho wrapped up the night’s scoring as he and Ross broke past the Monarchs backline. Ross laid the ball off to find Lucho on the side, who rounded the Monarch’s keeper to create a wide-open net, which he passed the ball into for the third Locos goal of the night.

– DF Andrew Fox and DF Macca King make their returns to the Starting XI. For Fox, it is the first time he has appeared in the Starting XI since September of 2020 while King makes his return following a month out.