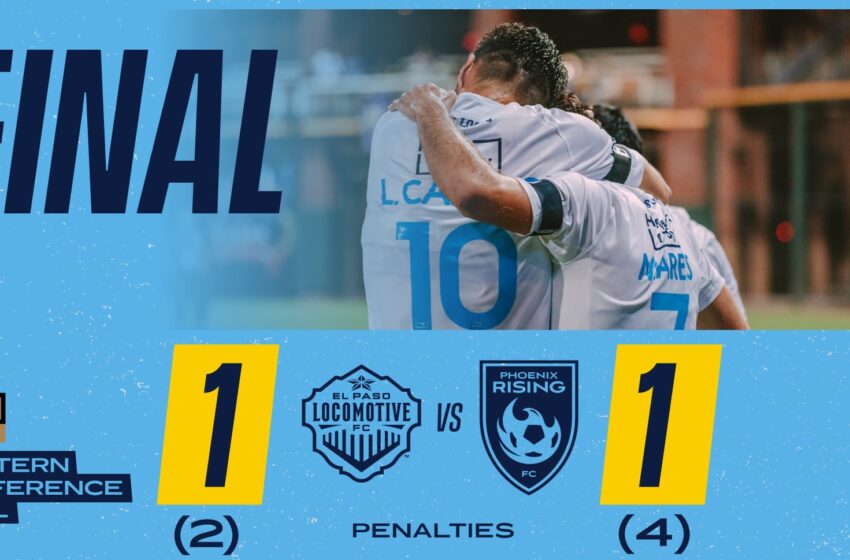 El Paso Locomotive FC bowed out of the USL Championship Playoffs after falling to Phoenix Rising FC behind a 4-2 penalty shootout after ending regulation 1-1.

Locomotive started the match on the front foot, putting quick early pressure on the Rising defense. The two sides battled through the first 45 minutes, with El Paso dominating the flow of the match.

Forward Aaron Gómez had the first strong opportunity in the 15th minute, only to be denied by Rising goalkeeper Zac Lubin.

While other chances went wide for Locomotive in the first half, it was Rising’s Jordan Schweitzer who found the opening goal in the 18th minute, hitting the underside of the crossbar to bounce over the line. Locomotive fought to find a first-half equalizer but went into the break with an uphill battle.

Mirroring the first half, Locomotive controlled the game with possession and passing, while Gómez continued to try and find his elusive goal with a battle against Lubin. The Locomotive pressure paid off just before the hour mark, however, as Rebellón lasered in a shot to the far post off a light pass from Carrijo.

Momentum began to swing slightly into Rising’s favor, however, Locomotive held fast to deny Rising of any real attempt on goal, while making opportunities of their own in search of the go-ahead goal.

Locomotive and Phoenix Rising entered extra time with a goal apiece as Phoenix dominated the opening moments with near shots that ended wide. The chippy battle continued with both teams being shown yellow cards, though neither side was able to find the advantage, resulting in a third straight penalty shootout for Locomotive.

While Carrijo and Richie were able to find their goals, it wasn’t enough to secure the win at Casino Arizona Field.

PHX: Jordan Schweitzer (Santi Moar), 18th minute: While Santi Moar was shut down by the Locomotive defense, a quick pass back towards Schweitzer finds an opening towards goal from distance. Schweitzer takes the shot, deflecting off the bottom of the crossbar to fall over the line and open the scoring for Phoenix Rising FC.

ELP: Bryam Rebellón (Leandro Carrijo), 59th minute: With no pressure on the left side, Eder Borelli sent a cross into the center box looking for Leandro Carrijo. Carrijo, covered by Rising FC defenders, lightly tapped the ball into the path of Rebellón, who rifled the shot into the far post to equalize the scoring.

– Locomotive makes its second straight appearance in the Western Conference Final, marking only the third team since 2015 to do so in the first two years of existence.

–  For the third straight match in the 2020 USL Championship playoffs, Locomotive went to extra time after ending level after 90 minutes of play, resulting in a third consecutive penalty shootout.

– Locomotive FC closed out its second campaign through the USL Championship, having made the incredible feat of reaching the Western Conference Final for the second straight year.