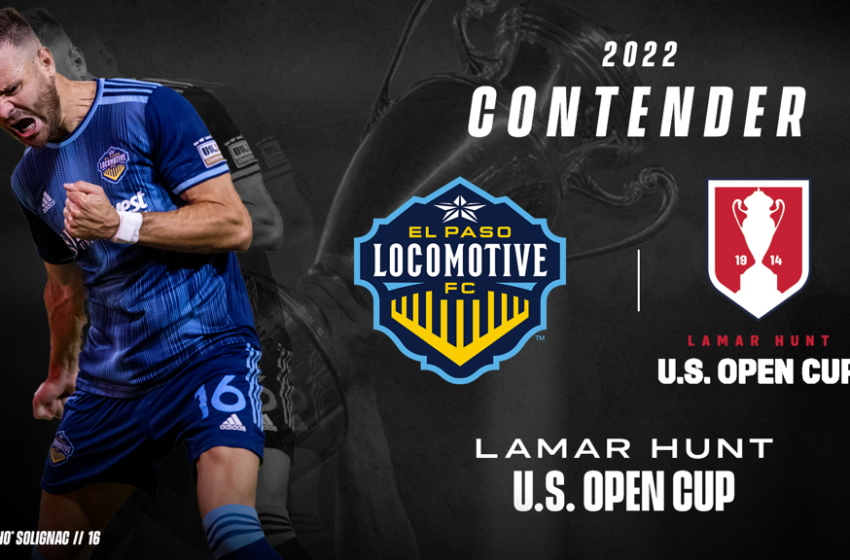 El Paso Locomotive FC, alongside the U.S. Soccer Federation and the United Soccer League, announced today it will be competing in the 2022 Lamar Hunt U.S. Open Cup.

Locomotive will host USL League One’s Central Valley Fuego FC, at Southwest University Park, as one of the USL Championship teams to enter the tournament in the second round. Details regarding date, kickoff time, and ticket information will be made available at a later date.

Following a two-year hiatus due to the pandemic, The Lamar Hunt U.S. Open Cup makes its triumphant return with the 107th edition of the history-filled tournament. The Lamar Hunt U.S. Open Cup is conducted in a single-game, knockout format featuring competition from amateur and professional leagues across the United States. El Paso Locomotive FC will have the opportunity to play against high-caliber opponents ranging from Major League Soccer, USL Championship, USL League One, and USL League Two.

“The Lamar Hunt US Open Cup is one of the understated gems of American sports tournaments,” said El Paso Locomotive FC General Manager, Business Operations Andrew Forrest. “It is a cross-league tournament that includes MLS, amateur teams, and everyone in between.  The matchups, the excitement, and the fact that there must be a winner in every game makes this tournament a fast-paced, fan-friendly experience with a playoff-like atmosphere in every single match.”

This will be El Paso Locomotive FC’s second foray into the Lamar Hunt U.S. Open Cup and the second time it has played host to the second round of the prestigious U.S. tournament. In its inaugural 2019-year, Locomotive hosted USL League One side Forward Madison FC in a match that saw El Paso bow out of the competition. Prior to the tournament’s two-year hiatus, El Paso Locomotive FC was set to compete against Detroit City FC in the 2020 edition, though the two clubs will have an opportunity to meet on field in USL Championship regular season in June. Los Locos was also selected as one of four elite USL Championship clubs chosen to represent the league in the shortened 2021 version of the Open Cup, having reached the USL Championship Conference Finals in 2020.

With the exciting return to a full tournament schedule in 2022, Southwest University Park will once again play a role in the Lamar Hunt U.S. Open Cup, as Locomotive hosts a new opponent, Central Valley Fuego FC.

Announced as a 2022 Expansion Club from Fresno, Calif., Fuego FC offers an exciting unknown match up, as it kicks off its inaugural year in USL League One on April 2.

For more information on the Lamar Hunt U.S. Open Cup or to see the full schedule as it has been announced thus far, visit the tournament’s website by  Clicking Here