After a two-game week that saw Locomotive come away with a 2-0 win over Eastern Conference foe Indy Eleven and a 1-1 draw with Colorado Springs Switchbacks FC, Macca King and Diego Luna have been selected for the USL Championship’s Team of the Week for Week 8.

For Macca it is his second straight appearance in the Starting XI for Team of the Week, earning this week’s nod after a stellar performance against Indy Eleven on Wednesday.

Playing a major role in Nick Ross’ goal with the cross that took a touch off Lucho’s head in the first half. Macca officially put his stamp on the game with the pass to Diego Luna that set the 17-year-old up with his goal to cement the 2-0 win. With a goal and assist to his name while completing 61 of 75 passes, three of which were key passes, Macca is deserving of the team of the week nod.

Luna earns his first career nod to the Team of the Week, following an exceptional Wednesday performance that saw the young midfielder record his second goal in as many games.

A midfield visionary, Luna completed 48 of 53 passes, five of which were key passes for a chance towards goal and winning 100% of his tackles.  Lluna continues to prove he is deserving to be at this level at such a young age and now has the Team of the Week nod to show for it.

The full USL Championship Team of the Week for Week 8 is listed below: 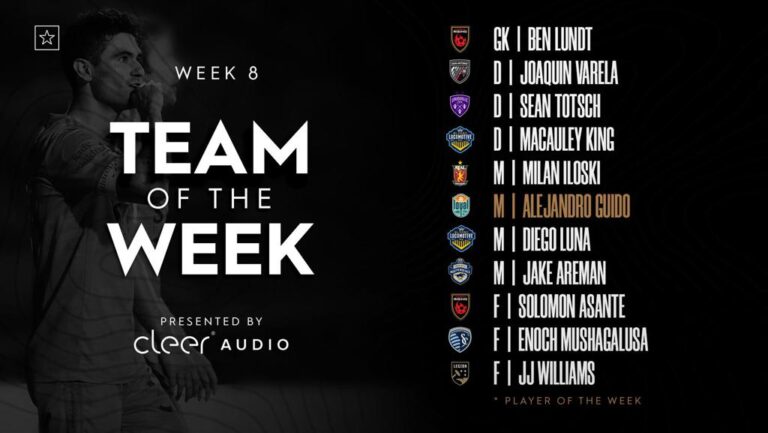 GK – Ben Lundt, Phoenix Rising FC: Ben Lundt recorded an eight-save shutout for Rising FC, making some vital stops to keep the side ahead before it pulled away for a 3-0 victory against Tacoma Defiance on Saturday night.

D – Sean Totsch, Louisville City FC: Sean Totsch won 5 of 5 tackles, 7 of 10 duels and made seven recoveries while completing 81 of 86 passes and almost found the net in attack, hitting the woodwork with a header in LouCity’s 3-0 win against Memphis 901 FC.

M – Milan Iloski, Real Monarchs SLC: Milan Iloski scored both goals for the Monarchs in their 2-0 win against Sacramento Republic FC, his first in the professional ranks, and had seven shots overall in the contest.

M – Alejandro Guido, San Diego Loyal SC: Alejandro Guido came off the bench with SD Loyal down a goal to the LA Galaxy II with 22 minutes to go and helped turn the game around, scoring a long-range goal before providing a beautiful assist on Miguel Berry’s late winner.

M – Jake Areman, Charlotte Independence: Jake Areman had one assist and two key passes while completing 51 of 59 passes overall, completing 6 of 6 dribbles and winning 9 of 11 duels in the Independence’s 3-2 victory against Hartford Athletic.

F – JJ Williams, Birmingham Legion FC: JJ Williams recorded a late game-winner for his first goal of the season to add to an assist on Neco Brett’s early finish and had four-headed clearances defensively in Legion FC’s 2-1 win at OKC Energy FC.