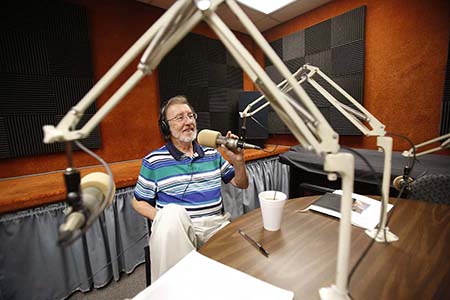 Longtime educator Keith Howard Pannell, Ph.D., has no plans to stop what he has been doing for nearly half a century.

Between teaching for nearly 46 years at The University of Texas at El Paso and hosting his radio show, “Science Studio,” this UTEP professor is leaving his mark not only on the UTEP-El Paso community, but on the greater scientific community.

“I don’t have immediate plans to stop teaching,” Pannell said. “I stayed here because of the weather, the students and also because I was successful and had enough money to run the research I wanted. I will continue to do the radio show as long as I can hold a conversation.”

The professor of chemistry was born in London, England during a German air raid and was evacuated from his family home five times before the age of five. He attended boarding school throughout his childhood until he attended the University of Durham in east England, where he studied chemistry.

He took on several teaching jobs before studying chemistry as a Ph.D. student in Toronto, Canada and moving to the University of Georgia in the United States for postdoctoral studies. Shortly after returning to England, Pannell returned to America, where he had several job offers. He chose UTEP because of its proximity to the border with Mexico, which he found adventurous.

“I came over and found wonderful weather, wonderful students and some really good research projects in my area of silicon and transition metals,” Pannell recalled. “I’ve had an exciting career here.”

Pannell began teaching chemistry at UTEP in January 1971. Since then, he has conducted research and taught in locations such as Japan, Belgium, Great Britain and Hawaii and has traveled to different universities around the world.

Pannell’s relationship with public radio began shortly after he arrived at UTEP.

“I like radio, and when I came to UTEP in 1971, that coincided with the beginning of National Public Radio (NPR), so we just happened to be starting at the same time,” Panell recalled. “I used to go over and fundraise. I was with a friend, Clarence ‘Kiki’ Cooper, and I decided to ask a scientific question on the air and asked for donations, and people donated. We later collaborated to start this radio program.”

“Science Studio” is a half-hour, weekly segment on KTEP-FM (88.5) that airs every Sunday at 7 p.m. The program showcases a broad range of studies, revealing that research goes beyond science and engineering.

Pannell says doing the radio show is like therapy for him; it gives him a chance to do something he loves, which is converse with interesting people every week and explore new research being done by these people.

“These aren’t lectures; they are conversations to engage an audience in interesting people and interesting topics in science and other research areas,” Pannell said. “This is important because of several issues surrounding science. I want to get people to see that science is good and scientists can be good.”

Robert Kirken, Ph.D., dean of the College of Science and a colleague of Pannell’s for 11 years, remembers taking part in “Science Studio.”

“I had a wonderful experience when he interviewed me on his radio show,” Kirken recalled. “I remember being quite impressed with his questions and how he easily transitioned from one to the next on our topic, which was cancer. To make the conversation more interesting to the listeners, he would often interject with witty comments and explanations that I believe brought greater clarity and appreciation to the subject.”

For his own chemistry achievements, Pannell recently became part of the 2016 class of American Chemical Society (ACS) Fellows, which includes 57 national and international scientists who have demonstrated outstanding accomplishments in chemistry and made important contributions to ACS, the world’s largest scientific society.

Pannell’s work on silicon and silicon metal systems has been recognized internationally. He has been active within ACS and has published several works to solidify his research reputation. He continues to organize regional meetings for ACS in El Paso.

Pannell also serves as vice president of the Texas Academy of Science. He said he plans to play an active role in the academy over the next few years to try to increase its visibility and increase the number of people who are involved in the academy, including students and faculty, as well as use his position to give El Paso a voice in the academy.

Pannell also is part of the Welch Foundation, a large private funding source for basic chemical research. According to Jorge Gardea-Torresdey, Ph.D., the chair of chemistry at UTEP, Pannell has been one of the most active members in Texas, keeping a grant with the foundation for 42 years.

“Usually people who have successes move from place to place,” Gardea-Torresdey said. “Dr. Pannell has stayed here in El Paso, which speaks highly of him and the work he does for this community.”

After nearly 46 years, Pannell has seen many changes at the University. One of the most significant is its transformation from a “low-key institution” into what he considers a Tier One university.

“This is a regular Tier One university as far as I’m concerned, and I’ve given talks at universities all around the world and in North America,” Pannell said.  “We’re up there; we’re doing fine.”

He explained that the biggest changes are those of expectation on the part of everybody. He remembers arriving at UTEP and seeing a smaller student body compared to the now nearly 24,000 students who make up the University. He also spoke about the physical growth of the University and the Department of Chemistry.

“This institution and what goes on here is a model for the country,” he said. “We’ve come a long way in the 40-odd years I’ve been here, from a strictly more or less undergraduate institution to essentially a Tier One institution, and that’s a short period of time to do this.”

Pannell has no plans to stop doing what he’s doing in the near future. He will continue to broadcast “Science Studio,” as well as teach at the University as long as he can.

“Coming to the end of a career, there’s a feeling that there’s a responsibility to give back,” he said. “I’m lucky I’ve done research since my second year here and we’ve had groups that have studied abroad and gone all over the world … it’s not just a select, small group of people and that’s exciting. So everybody now, in the College of Science, engineering and all around, realize that they are a part of this special research. That wasn’t true when I came, but it is now.”