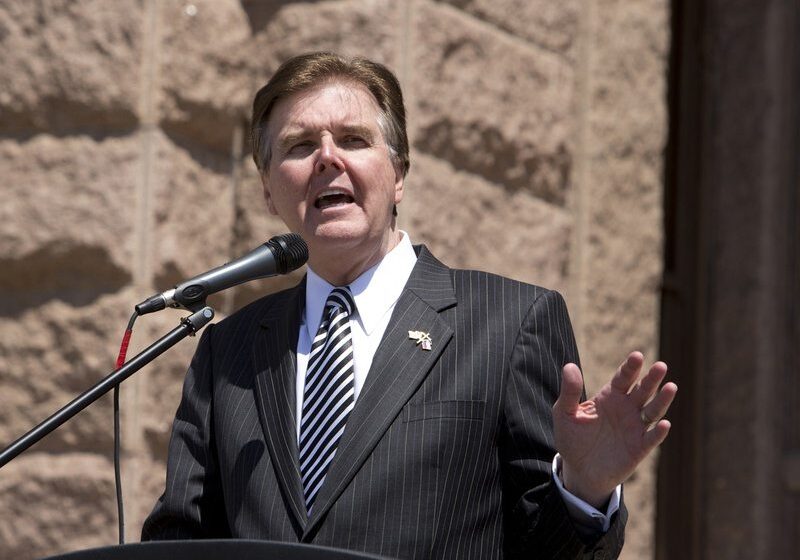 In his most aggressive terms yet, Lt. Gov.Dan Patrick excoriated Texas universities for raising their tuition in recent years, suggesting that the Texas Senate will try to limit tuition growth when it reconvenes next year.

At a press conference Tuesday before a meeting of the Senate Higher Education Committee, Patrick pointed to graphs detailing how total academic charges at the state’s universities have grown 147 percent since 2002. Median household income in the United States has grown just 32 percent during that time, he said.

“People did not send us here to Austin to allow universities to raise tuition five times their salaries,” Patrick said.

Patrick said “everything is on the table” in terms of legislative remedies if such growth continues.

“What we are asking is for our universities to be as fiscally responsible as we ask ourselves to be and for our agencies to be,” he said. “They are not an exception.”

He later added, “They need to scrub their budgets like we scrub ours. Every dollar that they spend needs to be scrubbed.”

Patrick said he was particularly chagrined about tuition increases this year. Most schools in the state, including the University of Texas at Austin and Texas A&M University, will charge students more in the upcoming school year than they do this year. That’s true, Patrick said, even though the Legislature increased appropriations for the universities by $282 million in 2015.

“So many universities immediately — before the budget was dry — started raising tuition,” he said.

Patrick also raised several ideas that he said could immediately cut tuition costs by 25 percent. Most of that savings would come from

eliminating a state law that requires universities to set aside 20 percent of the tuition they collect so that money can be used for scholarships, work-study programs and other forms of financial aid, he said.

Patrick called that rule “nothing more than a hidden tax.”

“We need to end the 20 percent set-aside next session,” he said.

He also said that the universes should rein in administrative salaries and bonuses.  And he argued that the state should look at performance-based funding for universities rather than dispersing funding based on how many students enroll in each school.

But Patrick said he was open to the Legislature re-taking control of tuition. And Sen. Kel Seliger, R-Amarillo, chairman of the Senate Higher Education Committee, said at the press conference he planned to reintroduce a bill that would require universities to meet certain performance metrics to raise tuition. He filed such a bill in 2015, but it didn’t become law.

Later at the hearing, higher education officials gently pushed back against some of Patrick’s arguments.

Raymund Paredes, commissioner of the Texas Higher Education Coordinating Board, said he agreed that rising college costs are “troubling.” But, he said, “the fact is we are below the median cost of higher education in the country.”

Meanwhile, university officials said they were working hard to cut costs and that their tuition increases were necessary to keep up with a long-term decline in per-student state appropriations.

A&M Chancellor John Sharp said he appreciated the $282 million added to university budgets statewide in 2015. But when that money was divided up among all the schools in the state, it amounted to just over 50 cents per semester credit hour provided to each school.

“While last session’s appropriation was generous, it did not cover the rate of inflation,” Sharp said.

University leaders have long argued that tuition increases are the result of the dwindling share of state funding they receive. At UT-Austin, for example, state appropriations make up 12 percent of the budget. In 1984-85, that share was 47 percent.

But Patrick said the Legislature doesn’t deserve all the blame for that shift. Universities have raised prices so much that “even the Legislature can’t keep up,” he said.

Disclosure: The University of Texas at Austin and Texas A&M University have been financial supporters of The Texas Tribune. A complete list of Tribune donors and sponsors can be viewed here.