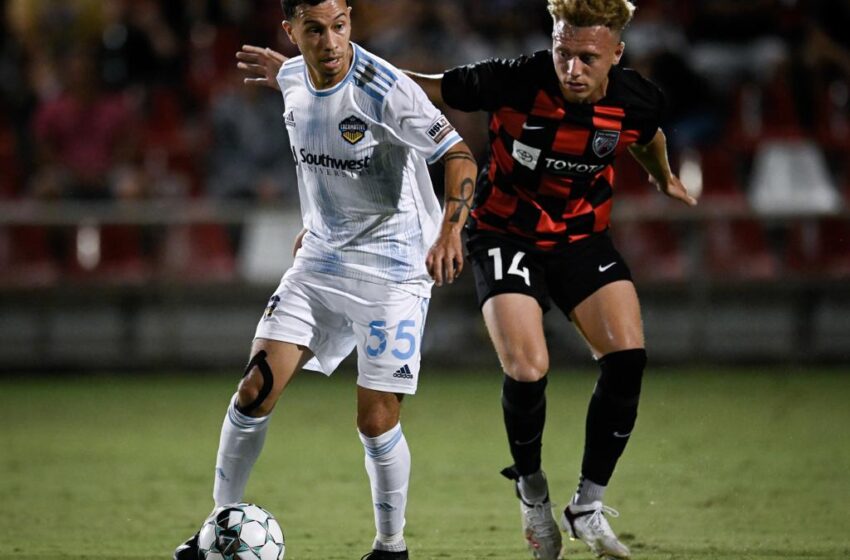 Forward Lucho Solignac and Midfielder Diego Luna each added to their season team-leading goal count with a goal apiece. Meanwhile, Defender Andrew Fox made his first appearance of the season for Locomotive, subbing into the match in the 87th minute.

The Locos looked aggressive coming out of the gates, testing the waters through early chances from Solignac and Forward Aaron Gomez. The high pressure led to a scramble in the box that ended with a San Antonio handball to gift Locomotive the penalty kick opportunity.

Solignac coolly converted the penalty in the 18th minute to provide a lead. San Antonio kicked it up to chase the equalizer before the half, as SAFC’s Jose Gallegos took a shot towards goal that was easily read by Goalkeeper Logan Ketterer.

El Paso kept its momentum through the second half, striking towards goal through a beautiful header by Defender Eder Borelli before Luna doubled the Locomotive lead in the 71st minute with a cheeky chip.

While San Antonio was able to pull one back just minutes later through Axel Sjoberg, the defensive work from Defenders Yuma and Matt Bahner as well as box-to-box action from Midfielder Richie Ryan kept San Antonio from salvaging a point at home. Locomotive ultimately claimed the full three points on a 2-1 goal line.

Up next, El Paso Locomotive continues through its gauntlet of quick turnaround games by hosting Real Monarchs at Southwest University Park on Saturday. Kickoff is set for 7:30 p.m. MT and tickets are still available online or by calling 915-235-GOAL.

The match will also be broadcast live digitally on ESPN+ and locally on the CW.

ELP: Lucho Solignac (Penalty Kick), 18th minute: Following a San Antonio FC handball in the penalty area, the referee pointed to the spot. Solignac converted the PK once but was forced to retake it for encroachment. Upon the second kick, the penalty kick was good providing Locomotive with a first-half lead.

ELP: Diego Luna, 71st minute: Sebastian Velasquez sent a ball within 6-yards in towards the center where Luna fought with a San Antonio defender, out dribbling him before scooping the ball up and around his mark and SAFC goalkeeper Matt Cardone to provide EL Paso a two-goal lead.

SA: Axel Sjoberg (Cameron Lindley), 74th minute: From a deep freekick opportunity, Lindley hit it far into the penalty area where Sjoberg rose above the rest to get a head on the ball. The headed effort was just enough to beat Goalkeeper Logan Ketterer, pulling one back for San Antonio and keeping them in the fight for a point.

– This clash at Toyota Field is only the second time El Paso has traveled to San Antonio. The first was in June 2019, a match that ended in a scoreless draw.

– FW Lucho Solignac scored against his former club with his penalty kick conversion in the 18th minute. In 2020, Lucho captained San Antonio FC, leading the club’s scoring with 8 goals in 15 appearances.

– DF Andrew Fox made his first appearance of the season coming on as a substitution in the 87th minute. This was Fox’s first appearance for Locomotive since September 19 against the Monarchs where he picked up an unfortunate leg injury.