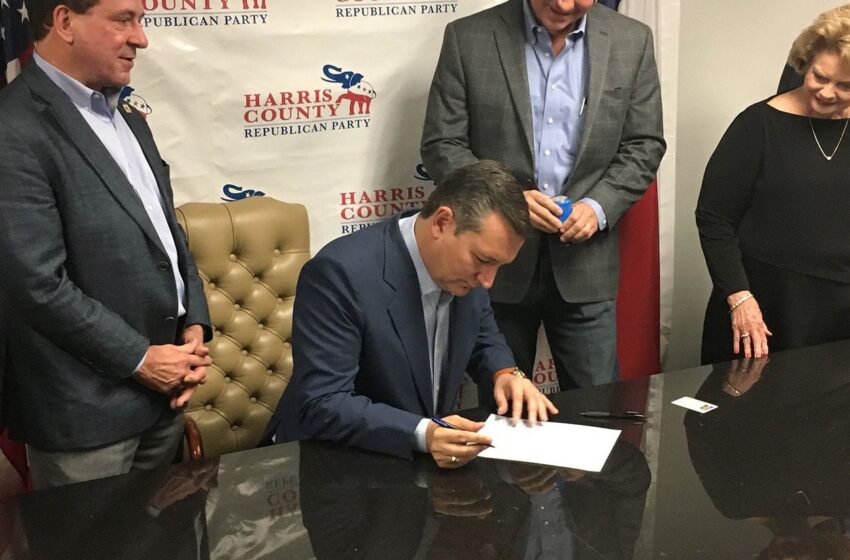 HOUSTON — U.S. Sen. Ted Cruz, R-Texas, made his re-election bid official Saturday, brushing off his competition’s criticisms and looking to keep focus on the Republican agenda in Congress.

Surrounded by a small group of supporters, Cruz filled out paperwork to file for re-election at the Harris County GOP headquarters in his hometown here. He made the appearance just hours after the Senate passed a sweeping tax reform bill, which he hailed as a “major turning point” as Republicans work to make good on their promises ahead of the 2018 elections.

As he seeks a second term, Cruz faces a Democratic opponent in U.S. Rep. Beto O’Rourke of El Paso and a few lesser-known primary challengers. All of them are going after Cruz as an absentee senator who turned his attention away from Texas when he ran for president in 2016 — criticism that Cruz dismissed Saturday.

“Well, it is hardly news that political opponents are launching attacks,” he told The Texas Tribune after filing. “I think that is a predictable part of the democratic process. I believe the people of Texas are going to hold every elected official accountable. Did you do what you said you would do?”

First elected in 2012, Cruz insisted that he has worked to keep his initial promises to Texas voters “every day in the United States Senate — and for that matter, every day running for president last year.”

Since the election of President Donald Trump last year, Cruz has emerged a close ally of his 2016 primary rival on issues ranging from health care to judicial appointments. Asked Saturday if he’d welcome Trump’s support for re-election, Cruz steered the conversation back to Republican efforts in Congress.

“I recognize the folks in the media love to obsess over the horse race and the latest political ups and downs,” Cruz told the Tribune. “I try to stay out of the battles of personality and focus on results.”

In extensive remarks to supporters after signing the paperwork, Cruz extolled the highlights of the tax bill, which includes a repeal of a key part of President Obama’s signature health law that Cruz said would hopefully lead to a renewed effort to unwind the law next year. It also features an amendment from Cruz that would allow parents to use tax-advantaged “529” college savings plans for K-12 education. Vice President Mike Pence had to cast a tie-breaking vote for the amendment.