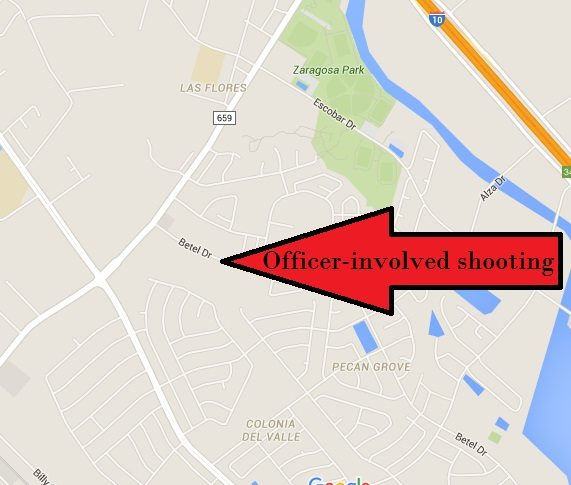 Police say the incident started along the 9000 block of Betel in the Lower Valley, shortly after 5 a.m., when a female called police to report that her vehicle had been broken into and that she was confronted by the burglar.

According to EPPD officials, as officers responded, a marked police unit met with the victim, while a second marked unit checked the apartment complex parking lot for the suspect.  Police say the suspect vehicle was located in the rear parking lot of the complex at which time two uniformed officers exited their patrol vehicle and attempted to make contact with the suspect.

Official say the suspect attempted to drive away in the vehicle and struck a parked vehicle causing it to roll the vehicle onto its side. The suspect vehicle then drove at the officers at which time one of the officers shot at the vehicle in defense of herself and her partner.

Despite the shots fired, the driver managed to leave the complex and began driving through the neighborhood. A short time later, other officers located the vehicle and suspect, along with a female passenger. Officers say the suspect then fled once again and ultimately crashed again, this time on Kernel Street,  where the suspect again tried to run away but was apprehended a short time later by officers.

Police say that the male suspect was treated for a non-life threatening gunshot wound and the female passenger was taken for medical evaluation, based on the “significant impact involved in the crash at the apartment complex.”

EPPD official add that the vehicle the suspect was driving had been reported stolen and investigators have identified 22 vehicles that were burglarized overnight at the apartment complex on Betel.

Department officials say that the investigation continues at this time with the Crimes Against Persons Unit of the El Paso Police Department, the Crime Scene Unit, the Shooting Review Team and the Texas Rangers all investigating this incident.

As is customary, the involved officer will be placed on administrative duty pending the outcome of this investigation.