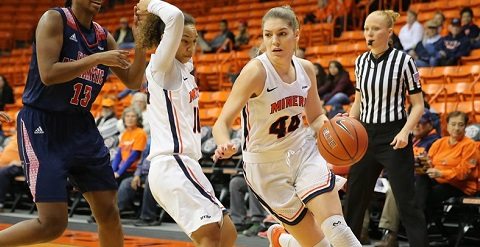 HUNTINGTON, WV- Katarina Zec put up 20 points to go along with a career-high nine rebounds to pace a quartet of Miners in double figures but UTEP was edged, 66-64, at Marshall Thursday evening.

Najala Howell came up with an offensive rebound and putback to make it a two-point tilt. The Miners (14-10, 5-6 C-USA) got a stop and had the ball with a chance to tie or take the lead, but Howell’s runner in the lane rimmed out.

Marshall connected on three straight free throws to go up by five (66-61) with nine seconds left. Zec drilled a 3-pointer to get the Miners within two (66-64) but they were unable to get a steal or force a jump ball on the ensuing in-bounds play as time expired.

“We didn’t put a good product on the floor tonight and weren’t ready to play,” UTEP head coach Kevin Baker said. “I’m disappointed with that. We just didn’t play well enough to win. We had opportunity after opportunity. It wasn’t our night.”

Howell (15 points), Tamara Seda (12 points, eight rebounds) and Jordan Alexander (11 points, five boards) buoyed the play of Zec but no one else on the team scored more than two points.

It was a sluggish start to the game for both squads with Marshall holding a 7-6 edge five-and-a half minutes into the contest. The Thundering Herd scored the next four points in the tilt to secure a five-point cushion (11-6) with 2:27 left in the frame. A lay-up by Zuzanna Puc followed by two free throws from Howell trimmed the deficit to one (11-10) but Marshall was able to reinstate a five-point margin (17-12) through 10 minutes of action.

The Miners utilized an 8-2 run over the first four minutes of the second quarter to take their first lead of the game (20-19) and prompt a timeout by the Thundering Herd. A triple by Zec, off a feed from Rachel Tapps, put UTEP up 23-21 with 5:14 left in the period. Marshall struck back, closing the stanza on a 7-2 push to put UTEP down three (28-25) heading to the locker room.

UTEP had a solid start to the third quarter, outscoring Marshall, 11-6, over the first four-and-a half minutes to secure a 36-34 advantage with 5:31 left in the frame. The Thundering Herd countered by unleashing a 9-0 run to put the Orange and Blue down seven (43-36) with 2:37 to play. Alexander put an end to that by splitting a pair of free throws before making a lay-up to get the Miners within four (43-39). A lay-up by Gore afforded Marshall a six-point edge (45-39) after three quarters of play.

The Miners received back-to-back baskets to make it a two-point game early in the fourth quarter but Marshall drilled a corner triple to push the margin to five (48-43) with 8:57 remaining in regulation. UTEP struck back with its own 5-0 run to tie the tilt at 48.

The two sides traded scores the next several minutes before consecutive turnovers by the Miners allowed Marshall to go up by five (62-57) with 2:57 to play. The Orange and Blue regrouped and eventually gave themselves the chance to tie or go back ahead but it wasn’t in the cards.

The Mines will now venture to play at Old Dominion at 12 p.m. MST/2 p.m. EST Saturday. Brandon Cohn will have the call of the game on 600 ESPN El Paso.