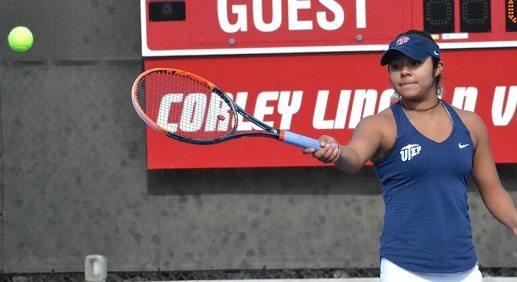 The freshman prevailed in a tight battle over New Mexico’s Natasha Munday 7-5, 7-6(7) in the No. 2 singles draw final. The victory marked Martinez’s eighth win in the fall season.

“It was a very hard fought match, but Erandi never gave up and won,” head coach Ivan Fernandez said.

The Miners also saw a strong performance from fellow freshman Alisa Morozova, who was playing in the consolation final of the same bracket. Morozova came out strong to take the first set 6-2, but Utah State’s seasoned player in Sabrina Demerath, a senior, took the final two sets 6-3, 6-4 for the win.

“Alisa played a very experienced player from Utah State. This is the best I have seen Alisa play all semester,” Fernandez said. “I see a lot of positives going into the spring.”

In other singles action, freshman Milena Baigorria fell to another experienced Aggie in Maggie O’Meara, who took the match 6-0, 6-0.

The end of the Wildcat Invitational concluded the fall season for the Miners, who will return for the spring portion of play in January.