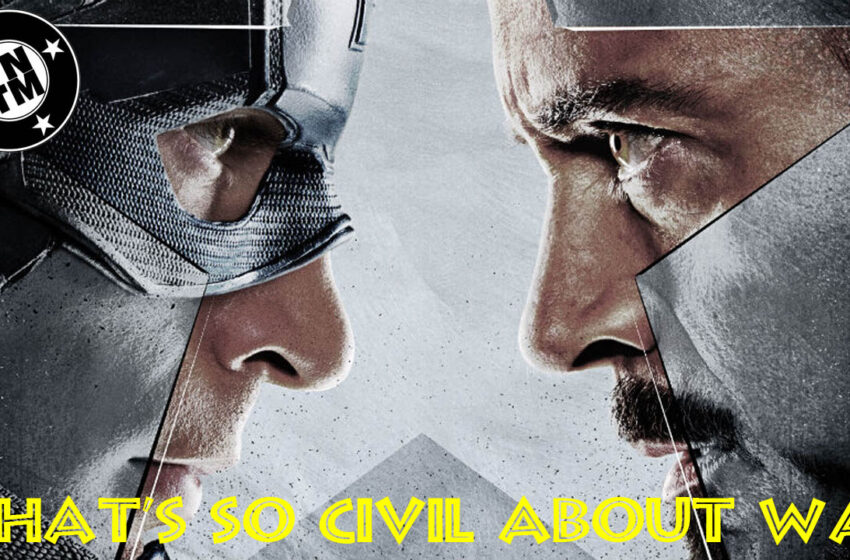 Jack and Troy from ZiaComics.com discuss the upcoming Marvel movie, Civil War.  In the Civil War comics a super villain inadvertently let off a massive explosion during a televised raid of a house containing recently escaped villains.

This explosion killed a majority of the New Warriors as well as children at a nearby elementary school.  This tragedy prompted the U.S. Government to enact the Superhuman Registration Act. Intention of this act was to register all super-powered beings as living weapons of mass destruction.

It also required all costumed heroes to unmask themselves before the government and subject themselves to federally mandated standards.

This event triggered negative public opinion against the super-heroes. S.H.I.E.L.D. requested Captain America to become part of the enforcement of super heroes to register.

The super-heroes met to discuss the best course of action with Uatu the Watcher looking on.  In a secret meeting with the President, Iron Man suggested that the President proceed and push the registration act while he, Mr. Fantastic, and Yellowjacket vowed to bring Captain America to the ground.

At a press conference in Washington D.C., Iron Man gave a speech introducing Spider-Man to the podium. Spider-Man talked about how over the past years he had kept his identity a secret. He spoke about the registration act and how it gave superheroes a choice.

They could continue the trend Captain America advocated and have people with powers completely unchecked, or they could go legitimate and earn back a little public interest.

To demonstrate his support of the Act, Spider-Man unmasked himself and revealed to the world that he was Peter Parker.

She explained they know what it’s like to fight the good fight while being persecuted. Frost said that as long as the pro-registration side left the X-Men alone they would not join Captain America’s resistance.

As Captain America, Hercules, Daredevil, and Goliath were discussing their new secret identities they received news of a petrochemical plant fire with three or four hundred workers trapped inside.

Uniting the Secret Avengers, they headed to the plant only to discover that it was a trap set by Iron Man.

The long-absent thunder god Thor appeared and lashed out against Captain America’s Secret Avengers. As the Secret Avengers attempted to escape Thor used his hammer to subdue them. Thor blasted a hole through Goliath’s chest when he was attacked.

Thor continued his assault until the Invisible Woman used her powers to protect the Secret Avengers and allow them to escape. Thor, who had just killed Goliath, was revealed to be a clone. He and his mechanical hammer had been engineered to serve the government. His violent murder of Goliath was an unforeseen error in his programming.

The death of Goliath opened the eyes of many and put things in a different perspective.  This caused several members to switch allegiance. The Pro-Registration side ended up losing more members than anticipated and operations had to be put in action faster than planned.

Iron Man assembled a new group of Thunderbolts in order to hunt down the Secret Avengers.  This new group included some very brutal villains.

Eventually, the resistance mounted an attack against the pro-registration’s holding facility in the Negative Zone.  This attack released the prisoners. The fighting between many of Earth’s heroes led to the middle of Times Square.

Captain America was about to deliver a finishing blow to Iron Man when he was tackled by several emergency workers. Realizing the damage the war was doing to the city and its civilian population Captain America unmasked and surrendered.

Before his arraignment, Captain America was shot multiple times on the steps of a Federal Courthouse and killed.