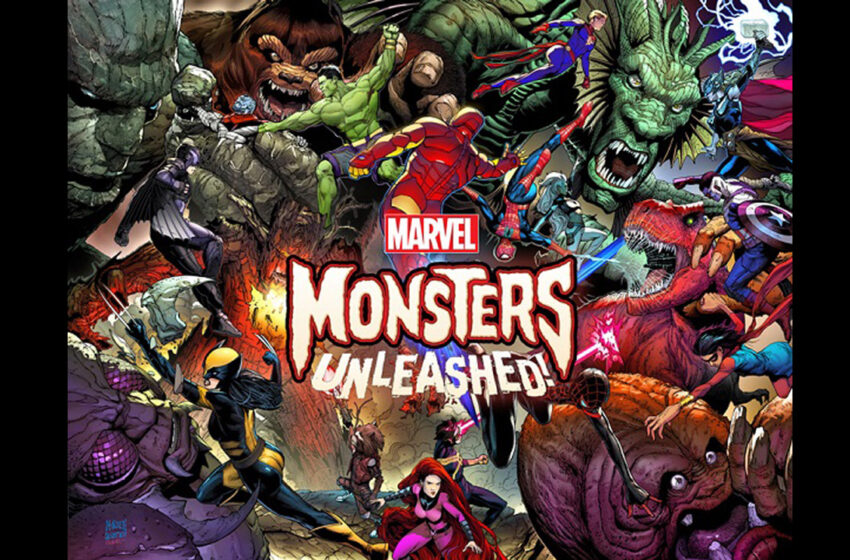 Marvel is pulling out all their big boy monsters in a new comic placing their popular super heroes against a collection of their most formidable “monster” characters.

“Our goal is to cram as many mammoth monsters of Marvel into Monsters Unleashed as will fit on the page,” said editor Mark Paniccia.

“If you’ve got a personal favorite, chances are very good you’ll see them causing some mayhem in this series. And if you’re worried we’ll forget one don’t be afraid to tweet at us @Marvel using the hashtag #MonstersUnleashed.”

Marvel Editor-In-Chief Axel Alonso doubles down on the promise of an appearance from every giant monster from Marvel’s back-catalog.  “If there ever were a monster who stood 10 stories high or taller and created mayhem in the Marvel Universe over last several decades, they’re gonna be in the story,” added Alonso.

“Jack Kirby, Steve Ditko, Don Heck, and Herb Trimpe – all of these guys created incredible monsters that we remember from my childhood,” Alonso says. “They’re the equivalent of those Ray Harryhausen-type monsters, those rubber suits that thrill us. To see them coming back, and to take them seriously, it’s a lot of fun.”

Marvel’s upcoming Monsters Unleashed is Marvel’s superheroes versus an all-star line-up of classic Marvel monsters.  This will be the first crossover event after Civil War II.  The title is set kick-off in January.  It will be a five issue bi-weekly event starting with a surprise attack on the Marvel Universe by a variety of monsters.  The list of Marvel monsters includes, but is not limited to Fin Fang Foom, recently heroic Groot, and Devil Dinosaur. It will be written by Cullen Bunn, with each issue drawn by a different artist ranging from Steve McNiven to Leinil Franics Yu, Adam Kubert, Salvador Larroca, and Greg Land.

“All of these artists are associated with huge scale superhero action, and we’ll be giving them room to breathe,” Alonso says. “There will be plenty of two-page spreads and splashes so the book feels as big as it is. Each issue is 30 pages long, which will allow for that. Why the monsters are here now and what they want, is gonna be part of the fun of the story. For people who say they want to see heroes fighting villains, well, here you go. This is the Marvel Universe being momentarily united to deal with this common threat, because if they don’t get united, there’s going to be no Marvel Universe to live in. So that’s an interesting dynamic right there.”

“It’s an all hands on deck situation. Imagine something like the Hulk only much bigger. With the destructive force those creatures have the heroes will have to mobilize much more quickly,” said Bunn. “The heroes find themselves very quickly in a situation where they have no downtime. They have no chance to take a breath. They’re moving constantly against what are essentially cataclysmic threats over and over again.”

All Marvel heroes will be involved including more street-level crime-fighters like Deadpool and Luke Cage. Darkhawk is also featured in the promo image after a prolonged absence in the Marvel Universe. The Marvel heroes have been divided by recent conflicts like Civil War II. This cataclysmic threat will force them to put aside their differences and unite. The advantage is readers unfamiliar with recent Marvel continuity can easily jump in with no prior knowledge of all the recent ins and outs.