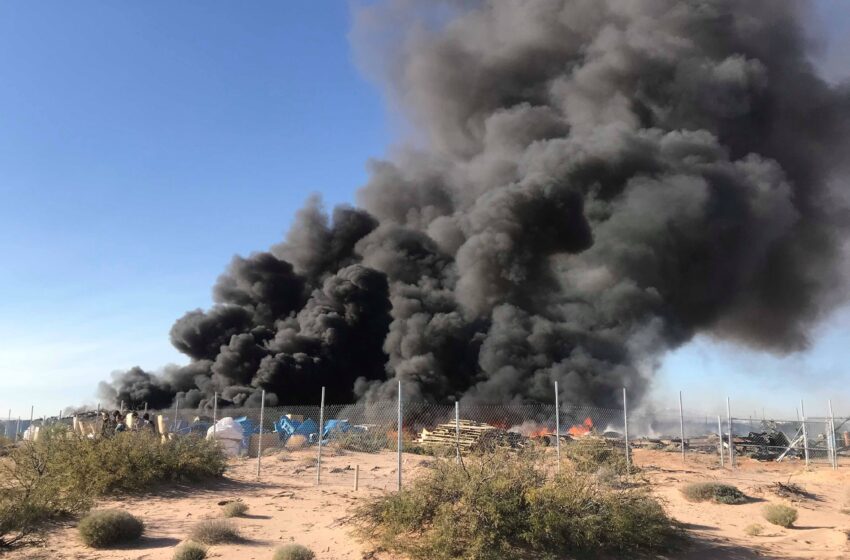 A massive, smokey fire in the High Desert northeast of Horizon City had virtually all county fire crews battling the blaze Saturday afternoon.

The fire broke out just after noontime, at a lot in the middle of the desert,some 6 miles northeast of Horizon City and almost a quarter mile off Horizon Boulevard.

Horizon City crews were first on the scene, getting to work under a towering column of smoke that could be seen for miles around the county.

The fire virtually consumed all inside the fenced-in property, which had a mobile home and a vehicle, as well as countless pallets, pallet bins, bales of plastic material, and at least 200 blue trash bins with the words ‘Lower Valley Water District’ imprinted on the side.

The pallets and pallet bins were also filled to the brim with what appeared to be waste plastic, left over from various manufacturing processes.

As the fire continued to spread, the flames leapt up above the crews in 10-foot-tall firenadoes, the acrid air punctuated with the occasional, startling pop of a container exploding.

Crews quickly called for backup and for more water as well, as the property and surrounding area did not have a fire hydrant.

Crews from San Elizario, Mountain View, Socorro and Clint responded, all trucking water to the site to help contain the quick-moving fire. At its height, nearly three dozen crews were battling the fire, as scores of residents – some on ATVs and UTVs, shot pictures and videos of the blaze.

At the blaze’s height, crews were going through a tanker of water almost every 5-8 minutes, but the teamwork of the visiting teams – and the waiting filled tanker trucks – helped them get the fire under control.

One witness, indicated he was on the phone with the owner of the property, said the man was concerned about the status of the trailer, which had already been burned to the frame.

As of press time, there were no reports of any injuries as a result of the fire, and the cause of the fire was still not known.