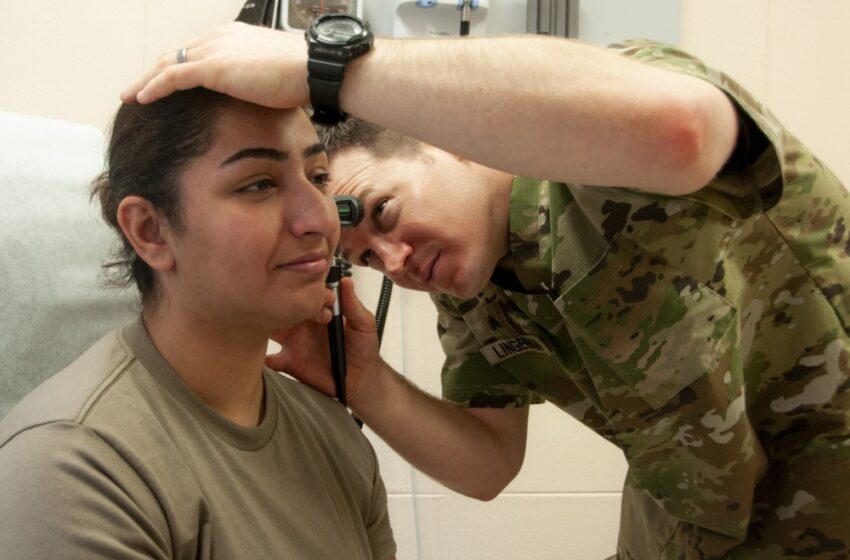 A 30-minute drive past El Paso’s city limits in any direction leads to the Chihuahuan Desert sand, shrub and mountains, as far as the eye can see.

Going north, the drive will lead to a secluded training ground, part of Fort Bliss, which holds an important mission in the United States Department of Defense.

McGregor Range Complex consists of over 678,000 acres of training ground, designed to provide deploying units the space required for pre-deployment certifications, a requirement to deploy.

“We’re the first TMC to take that building so our mission was to open, set up and support the McGregor range Aid Station for all Soldiers training, (mobilizing or demobilizing) out of McGregor Range,” said Maj. John Bricker, Officer in Charge 7413th TMC.

Since the 7413th TMC’s activation, their mission has evolved from simply setting up and beginning operations at McGregor Range to supporting over 4,000 National Guard, Army Reserve and active-duty service members with Level I+, or role one+, medical care; which provides triage and treatment, while also offering laboratory and X-ray services.

“A lot of these (reserve-component and National Guard) units don’t have medical assets, that’s when we provide level I care,” said Bricker. “The majority (of units at McGregor Range) are National Guard. They are training to get certified and (deploy).”

Because deploying units have strict schedules, the health of Service members is essential to unit readiness and success.

“We try to get (Soldiers) back to training because that’s the whole deal. Soldiers come from Nebraska, Wisconsin and are not used to (hot, dry climates),” said Brinker. “Each individual Soldier has training requirements that they need to complete, if they aren’t in the field training their missing out on that requirement and essentially their unit may not get certified.”

Aside from acclimatization, occupational risks also pose a threat to unit readiness as deploying Soldiers reacquaint themselves with the armored equipment and vehicles needed during missions.

Preparing for upcoming training is essential for mission success, as the company is kept in the loop regarding upcoming troop movements to prepare for increased operations. One of the unit’s busiest periods occurs during Exercise Roving Sands, a three-week long joint air defense exercise which welcomes over 10,000 Soldiers to the training grounds and simulates combat operations in an austere environment.

“They’re here to train and get ready to go,” said Capt. Bernardo Black, a case manager with the 7413th TMC. “When they are sick we do what we have to do, if that means we’re open for 24 hours then we open 24 hours.”

For the 7413th TMC, the year-long activation tests their readiness, while offering opportunities to develop the Soldiers of the unit.

“We train as if we’re going to leave at any time. One of our Soldiers is a retail store manager, but here he’s a medic,” explains Black. “He’s getting great exposure, got back up to par and is a great medic so if they need him (to deploy overseas) he’s ready to go. For a whole year he’s been training for what the Army needs him to do.”

While the mission comes first, Soldiers within the unit are still taking opportunities during mobilization time to progress their Army skills through courses such as Basic Leaders Course and Air Assault. Regardless of formal training opportunities, Soldiers participate in unit training aimed at increasing proficiency in medical skills.

The training, sometimes referred to as Individual Critical Task List (ICTL), identifies deficiencies in common medical skills and builds on those skills.

“If a soldier gets hurt we have to track that Soldier from point A to point B and where they are going next,” said Black. “Sometimes we have to consult with commanders, but in the end we’re the medical authority. We’re going to do everything in our power to get Soldiers back to normal, but we make sure Soldiers aren’t away from training longer than needed.”

The 7413th TMC’s effectiveness has been recognized by William Beaumont Army Medical Center as the region’s top primary care clerks, as determined by the Joint Outpatient Experience Survey (JOES), while also receiving recognition from the U.S. Navy for supporting their training at the range as well.

On Feb. 11, the unit transferred authority to the 7412th Troop Medical Clinic and will demobilize in March 2019, returning to their homes to await their next mission, more ready than ever.