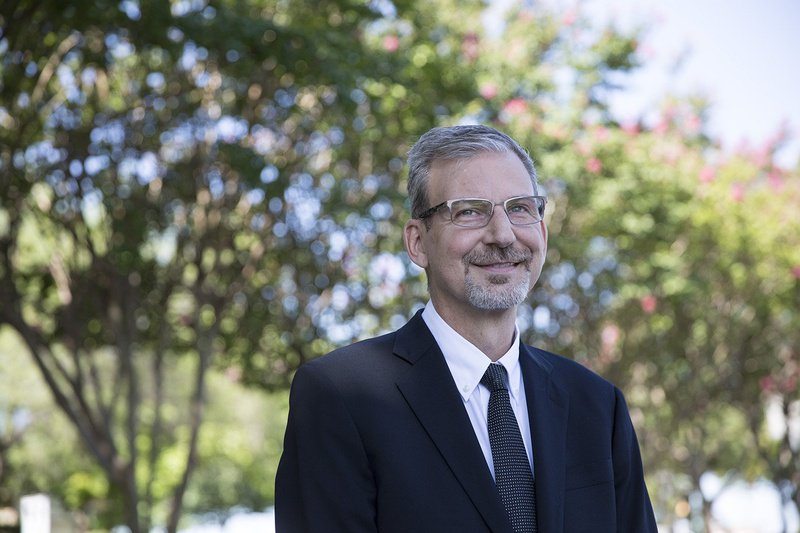 That’s why the openly gay, 49-year-old Dallas Democrat who owns five businesses — including The Dallas Eagle, a popular gay bar — is doing what some might say is impossible: attempting to win the governor’s seat by running against one of the most popular and well-funded governors in recent memory.

In an interview with The Texas Tribune, Payne — who is a political newcomer — said he realizes this is a difficult feat given Texas’ history as a predominately red state. But he says the challenge doesn’t scare him.

He says his background in business, rather than politics, will help him win the governorship. His businesses include a court reporting firm, a retail clothing outlet, a property management company and a land holding company.

Born in Maine, Payne grew up in Louisiana — in a children’s orphanage and in foster care — and moved to Dallas after Hurricane Katrina in 2005.

Hours before Gov. Greg Abbott announced his own plans to run for re-electionin 2018, Payne filed his paperwork with the Texas Secretary of State’s office to challenge the governor. Abbott’s campaign did not respond to a request for comment on Payne’s announcement. The Democrat quickly made headlines after he announced his plan to loan his campaign $2.5 million. Several other people have also filed paperwork to run for governor, including Democrat Tom Wakely, who unsuccessfully challenged U.S. Rep. Lamar Smith, R-San Antonio, last year.

The Tribune spoke to Payne about his ideas for the state and how he plans on building momentum ahead of the election to mobilize Texans. The following is an edited and condensed version of the interview.

What changes would you try to implement as governor?

Our educational system is very much underfunded, and we need to get back to the basics. We have too many rules and regulations in place and we need to give the power back to the professionals — those are the teachers and the parents. We also need to make our colleges and universities more accessible to everyone and stop the huge increases in tuition happening each and every year.

We also need to bring Medicaid expansion to Texas and ensure that women’s health is brought back to the forefront.

I support and uphold the Second Amendment wholeheartedly, but we need to continue to design policies that will provide more education and the promotion of gun safety.

Gerrymandering is not democracy, as far as I’m concerned. I believe our districts should be designed by an independent group so that they’re fair to all Texans and not just a particular group of individuals.

The last thing I’ll tackle is foster care. We had a law come down this past regular legislative session that allows adoption agencies to actually turn people away. There’s already a small group of people within our state who want to adopt or are eligible to adopt, and to limit that sends a horrible message to those children who need adopting. As someone who came out of the foster care system myself, that’s a law I would work to change almost immediately.

I was in an orphanage for most of my childhood. I didn’t enter the foster care system until I was 15. [Both experiences] were very positive ones. I had incredible people who cared, loved and, when needed, would discipline. I believe it was an experience that gave me the ability to have empathy and sympathy for people who are in that situation. This would help me shape Texas’ system because I’d make sure that we’re not leaving any children behind — whether its in the adoption or the foster care sector — and that we’re giving them every opportunity we can to succeed.

Do you think the Democrats are capable of coming up with good candidates, or is their inability to do that the reason people like you have to step up?

I consider myself a good candidate, but I’m not sure why the Democrats were not able to — or have not been able to — find someone. I’m running no matter who they find.

This is a job I would take very seriously and would be No. 1 on my list of things to do, but it’s not my career. I believe public service is something we should do where we’re not depending on that to supplement our living. We should all have careers outside of politics and serve out of a duty and love for our state.

I’ll give it as soon as it’s needed. Right now, we’re building our campaign headquarters and the money that I have is something that we’ll fall back on when we need it. We already have a huge grassroots campaign out there. We already have donations coming in from all over the state [and] as we build momentum, more and more people will get on the bandwagon.

Abbott has a nearly $41 million war chest heading into his re-election campaign. How do you plan on competing with that?

I plan to be a lot smarter with the spending of money. This is a campaign where I’ll be going out all over Texas and speaking with people one-on-one to get our message out. We know that people want to hear alternative solutions to the issues facing our state, so I know they’re going to listen.

I’ve never believed that you have to compete dollar for dollar. I’m not worried about that. I have no doubt we’ll be able to raise quite a bit of money and we’ll use any donations we receive in a very smart and effective manner.

The last gubernatorial candidate who ran against Abbott was former state Sen. Wendy Davis. She had a well-financed campaign and a well-known name, but she only won roughly 30 percent of the vote. What makes this election cycle different?

A lot has changed in four years. We’ve had a Republican governor for more than a quarter-century now and people want the change. They want to see alternative methods to the issues facing our society. Texans have had enough in the last four years and they’re ready.

Why should Abbott see you as a threat?

I don’t think he expects me. I don’t know that he sees me as a threat right now, but we’re 16 months away from the election and that’ll change.

Right now, I believe Abbott sees me as a single issue — meaning [he likely thinks], “Jeffrey is gay so there’s not much to worry about.” But that’s less of an issue to people than I believe he’s giving credit to. People want someone who’s going to shoot straight with them. They want to know that the person speaking with them is not just looking for the next vote whenever re-election comes up.

When people hear my story, they’ll see that for the last 49 years I’ve been a fighter. I don’t back down and I fight the good fight, but I’m also able to work with people.

In what ways do you see yourself as a fighter?

When Hurricane Katrina hit in 2005, I walked away with my two dogs and $2,000 in the bank — that’s it. But I was able to land in Dallas, fortunately, and I count my blessings for that. I was able to pull myself up by my bootstraps and surround myself with good, caring people and succeed.

I believe that’s a testament to the fighter that I am and believe that’s literally the way Texans live. We don’t let things get us down. We fight for what’s right and we continue to fight. That’s the type of person I am and that’s what I’m bringing to the governor’s office.

How will other campaigns compete with you? What do you think are the weaknesses of your candidacy?

I won’t be surprised no matter what they throw at me. Some may throw the “gay” issue at me, some may throw out “he owns the bar” or “he has no political experience,” plus whatever someone decides to invent.

It’s politics and all I’m going to do is go out there and show them exactly why I’m the governor for all the people of Texas and that’s what I’ll concentrate on.

They’ll throw everything and the kitchen sink at me. And I welcome it.