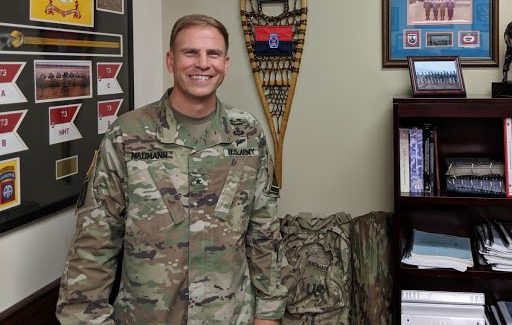 From the Canadian border to the Mexican border.  From the frozen climate of Alaska to the high desert of El Paso and Fort Bliss.

That is the career pathway of Brig. Gen. Scott Naumann in a nutshell.

Naumann, a 44-year-old native of Anchorage, Alaska, is the new deputy commanding general for support for the 1st Armored Division and Fort Bliss.

“I love this place,” Naumann said.

He arrived in early August, after a three-year stint at Fort Drum, N.Y. There, he served as the commander of the 1st Brigade, 10th Mountain Division and then as chief of staff for the division.

He is excited to be at Fort Bliss with all its opportunities to train and grow as a soldier.

He did a brief training exercise at the Dona Ana Range Complex in 2002 when he was part of the 2nd Ranger Battalion at Fort Lewis, Wash.

But besides that, this is all new for Naumann and his family.

“Most of my background is light infantry, Ranger, airborne,” Naumann said. “I am here in this armored division and never thought I’d have the opportunity to serve in. I am just tickled I am learning so much every day.”

“If you are not learning every day, regardless of where you are at in your career, then there is probably something wrong,” Naumann said.

He is particularly excited to be serving with Maj. Gen. Patrick Matlock, the new commanding general for the 1st Armored Division and Fort Bliss. Matlock took command in July.

“I am really enjoying this and really consider myself fortunate to have this opportunity,” Naumann said.

His family is also enjoying being at Fort Bliss. He is married to Sherri. His two youngest children – Erik, who turned 18 on October 24, and Emma-Grace, 14 – are students at Chapin High School. Erik is a senior and Emma-Grace a freshman.

Oldest son, 19-year-old Kurt, is a sophomore at the Virginia Military Institute.

“I am so proud of my kids, but also military kids,” Naumann said. “A lot of people don’t appreciate the demands. We volunteer to do this. Our families don’t. As much as we have volunteered, our kids are sacrificing just as much, as do our spouses.”

“I’m really proud how they have been able to rapidly fit right in,” Naumann said of his kids. “I think back. I went to the same school, with the same kids, for 18 years. I was kind of introverted and shy. I look at my kids and see how they can go to a new place, fit in and make friends.”

As the deputy commanding general for support, Naumann said his job is to help lead the personnel and materiel readiness for the division and make sure it is ready for whatever mission lies ahead.

“I want to leave this place better than I found it,” Naumann said. “One of the things I want to be able to do … people come and go. I will only be here so long. I want to codify a system that will outlive people.”

Naumann is amazed at how busy Fort Bliss truly is.

The division headquarters returned from a deployment to Iraq this spring and will soon be going through a Warfighter exercise here at Fort Bliss – its version of an NTC rotation.

“The ability to train here is unparalleled,” Naumann said. “Someone told me from pistol to missile. You can do anything here. And when you add White Sands … it is fantastic. There is a lot of opportunity here.”

David Burge is a news producer at ABC-7 in El Paso. He has more than three decades of experience working at newspapers in California, New Mexico and Texas. Covering the military is a particular passion.

Watch for more “Meet the Leaders” profiles in upcoming issues of the El Paso Herald-Post.