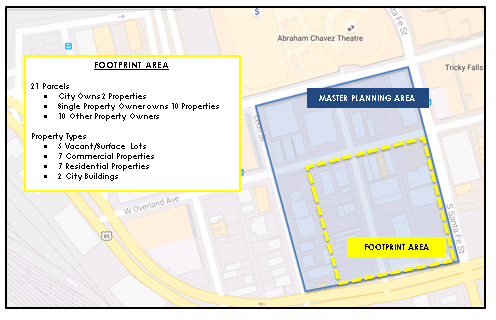 The City of El Paso has scheduled a community meeting to provide helpful information about the land acquisition process, including relocation assistance, related to the development of the Multipurpose Cultural and Performing Arts Center (MPC).

The intent of the meeting is to empower impacted tenants and property owners with useful information and provide them with the opportunity to ask questions and share their concerns.

The City has identified a site immediately south of the Convention Center for the master planning area of the $180 million Multipurpose Cultural and Performing Arts Facility – one of three signature projects approved by voters as part of the 2012 bond program.

The City will not acquire all properties within the master planning area. The goal is to impact the fewest number of properties possible for the MPC and its access points. The actual footprint of the proposed facility is located on one and a half blocks from South Santa Fe Street south to Paisano, west to the alleyway before Leon Street, up the alleyway to West Overland Avenue and east to South Santa Fe Street.

Additional community meetings with tenants and property owners will be scheduled throughout the land acquisition process.

The site was one of three identified in a Site Evaluation Report developed by HKS, as part of an urban planning contract awarded to them by El Paso City Council in December 2013. In 2014, HKS launched a community outreach campaign to provide with the public with opportunities to offer input for the Site Evaluation Report. The outreach campaign included a public planning kick-off event followed by six public outreach workshops and community project briefings that were held between February 2014 to January 2015.