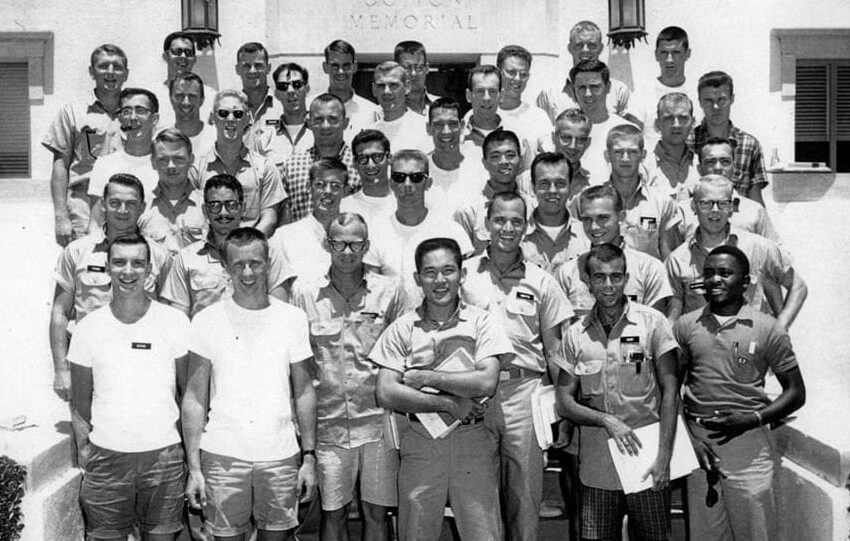 The Peace Corps’ promise of overseas travel and adventure excited Arthur Young, a Pennsylvania native who was unsatisfied with his life.

Young had earned his bachelor’s degree in civil engineering in 1955 from Penn State University, where he was part of ROTC. After serving in the U.S. Air Force and a brief stint with a Kentucky engineering firm, the U.S. Forest Service hired him to design access roads for logging in Helena, Montana.

Young jumped at the chance to join the Peace Corps, which President John F. Kennedy established in March 1961. He said Kennedy’s challenge from the previous year, “Ask not what your country can do for you – ask what you can do for your country,” resonated with him.

The revolutionary program’s goal was to spread American good will around the world with an army of U.S. volunteers who would live and work in developing countries. The first order Young received was to report to Texas Western College, now The University of Texas at El Paso, for training in June 1961.

His recalled his time in El Paso as being peaceful and welcoming for the most part. Young, who retired as an engineer in 2001, returned to UTEP recently as part of a reunion tour with Ann, his wife of 52 years. She is a Returned Peace Corps Volunteer (RPCV) nurse.

“(The campus) is beautiful,” he said after a walking tour of the inner campus and a few minutes before a Peace Corps information meeting Sept. 27, 2018, in the Mike Loya Academic Services Building. “There were a lot fewer buildings when I was here, but I still think it’s beautiful. I love it here.”

Kathleen Staudt, Ph.D., professor emerita of political science and a RPCV who served in the Philippines in the late 1960s, introduced the Youngs and asked if they would like to say a few words. Arthur Young obliged, but his wife playfully reminded him that Staudt only requested “a few words.”

That exchange got a laugh from the audience that included several UTEP undergraduates who wanted to learn more about the Peace Corps.

Staudt gave a quick synopsis of the program and offered some tips on how to navigate the UTEP Peace Corps website, and how to prepare for the application process that could take about nine months. She encouraged those interested in applying for the Peace Corps, which serves 62 countries, to have a volunteer background, examples of service learning, and marketable skills. She also told them that UTEP’s Peace Corps office is located on the second floor of the Loya building and staff were ready to assist any applicants. (Send inquiries to peacecorps@utep.edu.)

Anna Young told the group that Peace Corps volunteers usually get more out of the experience than they put into it.

Among those in attendance was Rebeca Fierro-Pérez, a senior psychology major who graduated from El Paso’s Riverside High School in 2013. She said she believes that the Peace Corps would enrich her life though service to others.

Fierro-Pérez, who is fluent in English and Spanish and has a working knowledge of French and American Sign Language, said that UTEP has helped prepare her for Peace Corps service by providing her with opportunities to study different cultures and assume leadership roles with student organizations. She has a long list of volunteer credits that stretches back to high school.

She said the recollections of the RPCVs, including the Youngs, made her even more excited to start the application process.

“(They) spoke with great joy about their experience and talked about how it changed their life,” said Fierro-Pérez, who also has studied health disparities in a UTEP research lab.

The Youngs, who live in Gardner, Massachusetts, came to UTEP after participating in an RPCV reunion in Estes Park, Colorado. They also planned to stop at New Mexico State University, where Arthur Young earned his master’s degree in civil engineering in the mid-1960s. The couple also scheduled visits to Carlsbad Caverns and White Sands National Monument in New Mexico.

Arthur Young remembers staying busy during his two months at UTEP with physical training in the morning, and classes about the language and culture of the cohort’s destination, Tanganyika, which became Tanzania in 1964. He said the technical training would help him to design and construct roads in the east African country, but laughed as he recalled that the cultural information was not as accurate and not as helpful.

Young said that at age 27, he was the oldest of his 44-member all-male cohort, which included trainees with backgrounds as surveyors, geologists and civil engineers. He also was the only one with a car, so when the volunteers had time off, they would load into his 1959 Plymouth and go around El Paso, to Juárez, Mexico, or to regional tourist spots.

The Peace Corps credits the group with being the first to graduate from its training on Aug. 20, 1961. From El Paso, the trainees conducted additional training in Puerto Rico before completing their preparation in Tanganyika.

Arthur Young said his Peace Corps involvement led to his professional success, which included jobs with a large global company and as Gardner’s city engineer for many years. He called the Peace Corps a life-changing experience.

“It opened the door to so many opportunities for me,” he said. “Having the Peace Corps on your resume means a lot. It helped me get a job with an international engineering firm. One of the biggest things I got out of it was the confidence that I could adjust to new situations and try new things.”

He also credited the Peace Corps for helping him meet his future wife, who served as a Peace Corps nurse in Tanganyika. They were married in Tanzania and their witnesses were fellow volunteers.

Today, the Youngs stay busy with travel and volunteerism. Arthur Young is an AARP volunteer who helps others with their income tax forms. He also serves as a trustee at the local library and a helper at a local history museum.