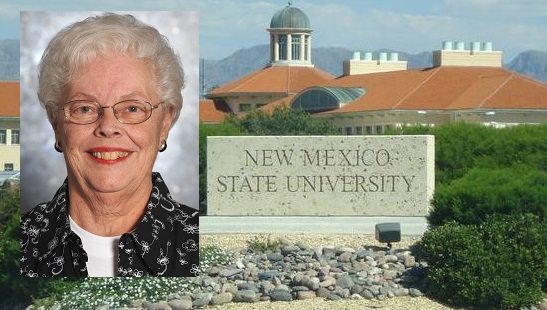 The life of Virginia Higbie, former dean of the College of Health and Social Services at New Mexico State University who helped shape the college’s successful programs, will be celebrated during a special memorial service this week.

The service will begin at 4 p.m. Tuesday, Sepember 5, at the NMSU Spiritual Center, on the west side of the Educational Services building near the campus duck pond. Light refreshments will be served.

Higbie, who passed away on June 15, 2016, served as the college’s dean from 1988 to 2000, and also served as interim dean in 2008. Higbie was instrumental in developing the college’s successful graduate and undergraduate programs in social work, nursing and public health sciences. She also worked with the state legislature to secure funding for the CHSS building.

“Virginia Higbie was a wonderful person who I had the pleasure of knowing for a long time,” said NMSU Chancellor Garrey Carruthers. “She was really the architect of the College of Health and Social Services that we know today. I can’t think of a better colleague during my time at NMSU. She was always incredibly honest and fair.”

Higbie, a resident of New Mexico since 1973, served as the second dean of the College of Health and Social Services. During her 12 years as dean, the college experienced considerable realignment of its units which then included the undergraduate degree programs in nursing, social work, and health science as well as the administration of NMSU’s four branch community colleges, initial graduate off-campus delivery of courses to White Sands Missile Range and to Kirtland Air Force Base, a small but vibrant community education program, the Weekend College, the Center for Educational Development and the Institute for Gerontological Research and Education.

During this period, the college experienced rapid growth in enrollment, expansion of degree offerings including the first graduate programs of the college and the attainment of national accreditation for nursing, social work and health science.

College of Health and Social Services Dean Donna Wagner said Higbies dedication to professional programs was instrumental in shaping the college into what it has become today.

“Dean Higbie was passionate about NMSU and the College of Health and Social Services,” Wagner said. “She left a legacy for both and we are grateful for her work.”

Because of her commitment and dedication to the college, her family and friends established the Virginia C. Higbie Endowed Scholarship in 2009. Since then, seven NMSU College of Health and Social Services students have benefitted from the scholarship.

“When I think of Dean Higbie, two words come to mind – passion and exuberance,” said Greg Fant, NMSU associate vice president and deputy provost. “She was passionate about students, health care and NMSU. Always upbeat, she communicated her passion effectively. NMSU is a better place because of her legacy.”

“In this capacity, Dean Higbie provided leadership to the community colleges, and at the time, I served as an academic adviser at the Grants campus,” Montoya said. “I valued her authenticity, admired her focus on policy and academic integrity, and learned to value the responsibility we each have as academic leaders.”

For more information about the memorial service, contact Nohemi Perez at 575-646-1106 or email nohemip@nmsu.edu.