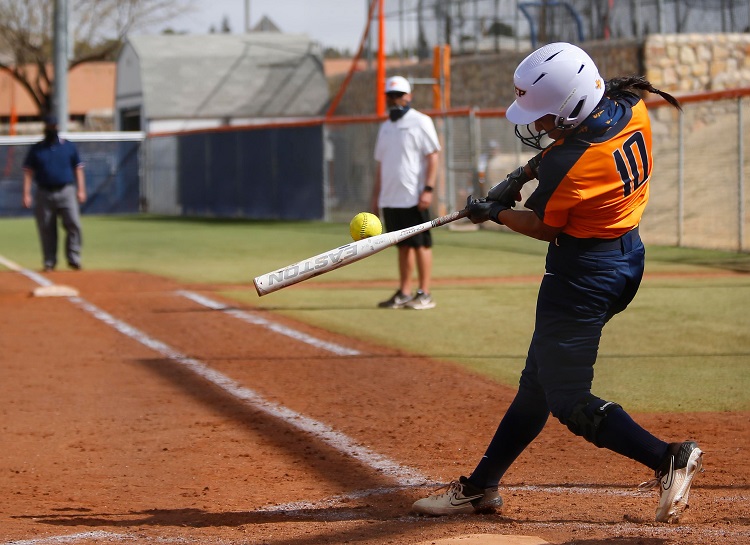 The Miners were the only team to notch a run against the Sooners in their 70-2 run differential to start their first four games of the season.

The first UTEP run to cross the plate in its second game of the day versus Oklahoma was redshirt sophomore outfielder Idalis Mendez who was penciled in the five spot all four games this week. Mendez, who has started the season 6-for-8 with a .750 average, got on base with her first hit of the game: a leadoff single to center field.

“I’m playing around with (Mendez) in the five (and) six spots (because) she has the ability to drive in a lot of runs,” UTEP Softball Head Coach T.J. Hubbard said. “You’ll always find yourself in situations in the first two innings of a game where the five and six spots lead off an inning.”

“(Somoza is a) kid who’s been grinding to it,” Hubbard said. “In the catcher’s spot – and this is what a lot of people don’t understand – you spend half your time in the bullpen and (wondering), ‘Can I get some defensive work in? Can I hit?’”

But, this weekend, she was two-for-four, with the second hit knocking in Mendez and Santos for the first RBIs (2) of her career with a single out of reach of the left fielder to make it just a three-run Sooner lead, 5-2.

“(Somoza is) a gritty, hardnose player,” Hubbard said. “She’s not that big, but she’s got a lot of heart.

“She just competes. I was proud.”

Mendez put the Miners in scoring position, leading off the bottom of the fourth inning with a double – her second extra base hit of the weekend – and was threatening to score after a single from senior Ariana Valles moved Mendez to third until she was ultimately left stranded on base.

Freshman Mackenzee Collins, making her first career start in the circle against Oklahoma allowing nine earned runs in three innings of work, but found a rhythm as she worked through the Sooner lineup.

“Mackenzee Collins did above average,” Hubbard said. “I thought she did fabulous (against Oklahoma in game two). I thought she was cruising (but) we should have made some plays behind her.”

In the first inning, Collins recorded two outs before allowing a run, and in the second inning, produced two weak fly outs to third base and left field before a two-RBI single was hit by USA Softball Player of the Year Watchlist honoree Jocelyn Alo. The third – Collins’ last full inning of work – saw only one Sooner run cross the plate.

Mendez’s two leadoff hits against the Sooners on Friday came on the heels of game one against Abilene Christian earlier in the day which also featured a Mendez leadoff hit.

“(Mendez) can slap (hit) and bunt if she needs to,” Hubbard said. “She can (also) drive the ball in the gap and score some runs for us. Just her athleticism and her ability to play at a high level – those are the kind of kids we’re trying to build the program around.”

The standout Miner against the Wildcats was sophomore utility Zaylie Calderon who came in the third inning for relief. Calderon sent the first two batters she faced down on strikes and got out of the shutout inning without allowing a hit.

“I think (Collins) and (Calderon) put themselves in contention (for) the starting role,” Hubbard said. “They’re definitely going to be at the top of the rotations.”

Calderon retired the side in order in the next top half, and in the fifth inning, did not allow a runner to get further than first base. Calderon gave up only two hits for the remainder of her outing and finished the day with four strikeouts over five frames.