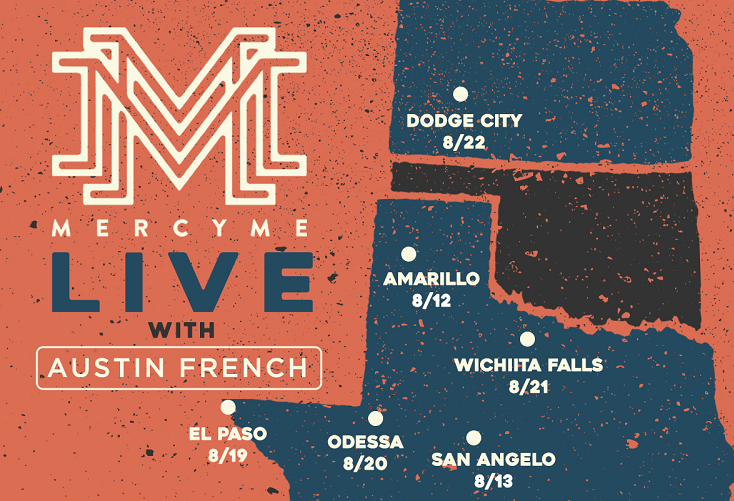 MercyMe is hitting the road this Summer for a special Texas and Kansas concert run with fellow Fair Trade Arist, Austin French and the Sun City is one of their stops.

The band will perform fan favorites as well as newer hits, including their latest, “Say I Won”; from their brand new album, inhale (exhale).

Promoters say that MercyMe have been” so excited to dive back into tour dates after cancelling shows in 2020, this summer taking over minor league baseball stadiums during their Live and Outside Tour, and to 30+ cities this fall for their inhale(exhale) tour.”

MercyMe were recently named Billboard’s Top Christian Artist of the 2010 decade, and in 2020 received their eighth American Music Award nomination.

In 2018 MercyMe was named Top Christian Artist at the Billboard Music Awards, was the top winner at the fan-fueled K-LOVE Fan Awards including a win for Artist of the Year, and was the GMA Dove Award Winner for Artist Of The Year.

Since their debut in 2001, the band has sold more than 9 million units in CD, single and DVD sales, garnered more than 48 No. 1 multi-format radio singles, and had four consecutive mainstream radio hits.

MercyMe made history in 2014 as “I Can Only Imagine” surpassed 2 million digital downloads, making it the first song in Christian music to go platinum and double-platinum in the digital domain. The song has now gone has gone 4x platinum.

The event is scheduled for Thursday, August 19 th at the El Paso County Coliseum at 7:00pm. Doors will open at 6:00pm. Tickets start at $23.75 and are available at Ticketmaster.com and group discounts are available.