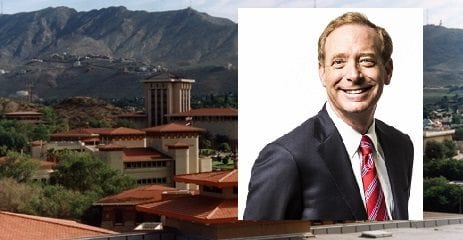 Brad Smith, president of Microsoft, will present a free public lecture as part of The University of Texas at El Paso’s Centennial Lecture Series.

“We look forward to welcoming Microsoft president Brad Smith to UTEP,” said President Diana Natalicio. “His visit offers a special opportunity for all of us, and especially our students, to share with him the exciting work underway on our campus, and hear his perspectives on the potential impact of artificial intelligence on the economic future of the Paso del Norte region.”

Smith is responsible for the company’s corporate, external and legal affairs. He leads a team of more than 1,400 business, legal and corporate affairs professionals working in 55 countries. Smith plays a key role in representing the company externally and in leading the company’s work on critical issues including privacy, security, accessibility, environmental sustainability and digital inclusion.

“While no one can predict the future, the rise of artificial intelligence will certainly impact our lives in profound ways,” said Brad Smith, president of Microsoft. “What jobs will technology eliminate? What jobs will it create? How will we manage the ethical implications of AI? These are all questions we must contemplate as we head into an AI-powered future. I’m looking forward to discussing them as part of The University of Texas ​at El Paso’s Centennial Lecture Series.”

Smith joined Microsoft in 1993 and before becoming general counsel in 2002 he spent three years leading the Legal and Corporate Affairs (LCA) team in Europe, then five years serving as the deputy general counsel. He has played a leadership role locally and nationally on numerous charitable, business and legal initiatives. In 2013 he was named by the National Law Journal as one of the 100 most influential lawyers in the United States. In 2014, the New York Times called Smith “a de facto ambassador for the technology industry at large.”

In addition to his work at Microsoft, Smith is active in several civic and legal organizations and in the broader technology industry. In March 2015, Smith joined the Netflix board of directors. He also works to advance several significant diversity and pro bono initiatives, serving as chair of the board of directors of Kids in Need of Defense (KIND) and as chair of the Leadership Council on Legal Diversity. In addition, Smith chairs the board of the Washington State Opportunity Scholarship program, at the appointment of the governor.

What: Centennial Lecture: “The Impact of Artificial Intelligence: What Will It Mean for the Future of Jobs“ by Microsoft President Brad Smith