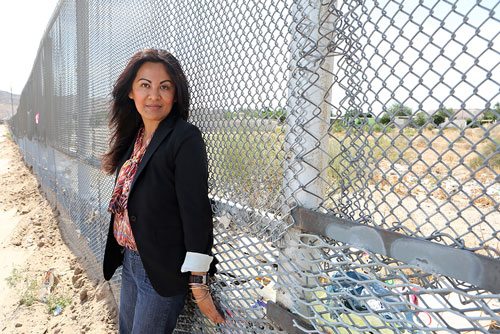 Border security and immigration aren’t just issues in the 2016 U.S. presidential election. They are topics being addressed and discussed in countries around the globe.

Gabriella E. Sanchez, Ph.D., assistant professor of security studies at The University of Texas El Paso’s National Security Studies Institute, is an anthropologist who studies the social organization of human smuggling groups. Her research looks at “coyotes,” the men and women who, for a fee, facilitate the transit of migrants and refugees across borders while attempting to avoid law enforcement detection.

Sanchez has conducted fieldwork in Mexico, North Africa, the Middle East and Australia, where she has learned that the conditions that lead to smuggling activity are similar everywhere. However, socio-cultural and geographic characteristics unique to each region shape the dynamics of the markets.

“I have been fortunate to travel to locations where I can spend time working with migrants, refugees and smugglers themselves,” Sanchez said. Despite the many challenges of the market and its potential for violence, among migrants and refugees in transit “there’s a great sense of community, support and solidarity” which she credits for the success of her research.

Sanchez’s work has been supported by federal agencies including the Department of Homeland Security, the Drug Enforcement Administration and the Department of State, and has informed smuggling research and policy.

“Dr. Sanchez’s research and expertise into the organizational dynamics of smugglers is groundbreaking and unmatched by anyone in the United States,” said Victor M. Manjarrez Jr., project director for UTEP’s Center for Law and Human Behavior. “We are fortunate to have someone such as Dr. Sanchez at UTEP conducting research into an area rarely studied.”

Sanchez is a regular contributor to academic blogs and online magazines, and her work has appeared in multiple edited volumes and academic journals. Last year, her book “Border Crossings and Human Smuggling” was a finalist for the International Association for the Study of Organized Crime’s Annual Prize for organized crime research.

Her work on women’s roles as facilitators of human smuggling, published in 2016 in the journal Geopolitics, described women’s roles as coyotes in Phoenix, Arizona, one of the main U.S. hubs for irregular migration.

“While frequently overlooked within the mainstream rhetoric of smuggling dominated by male-centered narratives of exploitation, victimization and violence, women play fundamental roles in the facilitation of irregular migration,” Sanchez explained. “[Women] recruit customers, negotiate fees and payment plans; withdraw smuggling payments from banks and wire transfer stores, care for migrants and drive or guide groups of border-crossers through the desert.”

In April 2016, Sanchez organized a groundbreaking event at the European University Institute in Florence, Italy, in collaboration with Luigi Achilli, Ph.D., from the institute’s Migration Policy Centre, and with the support of UTEP’s Office of Research and Sponsored Projects and the National Security Studies Institute. The top scholars on smuggling worldwide attended the event and explored the ways in which the smuggling business has evolved and adapted in Europe, Africa, the Americas, the Middle East and the Pacific.

“The smuggling market is always changing,” Sanchez said. “Some policymakers often claim smugglers are becoming more sophisticated, or that they have acquired more technology and see that as a synonym of their progress. I myself dislike the use of the word ‘sophistication’ because I think it professionalizes the activities of the smugglers who exploit and abuse migrants and refugees. Yet our collective research reflects that some smugglers are indeed quite effective at what they do, but that the smuggling market and its conditions have created room for exploitive, violent practices that have a negative impact on human life. ”

One way the smuggling market is changing has to do with advances in technology. Sanchez explained that with smartphones, people don’t always need a smuggler because they can use apps to lead them across most terrains.

“We’re witnessing this in Europe,” Sanchez said. “Smugglers only perform certain, very specific tasks along the trail, like the provision of the boats.”

Currently Sanchez is developing work outlining the kinds and the nature of the contacts that exist between drug and human smuggling organizations along the U.S.-Mexico border.

“It is not enough to say these contacts exist,” Sanchez said. “We need nuanced knowledge of the dimensions of these encounters if we want to be able to devise effective enforcement responses.”