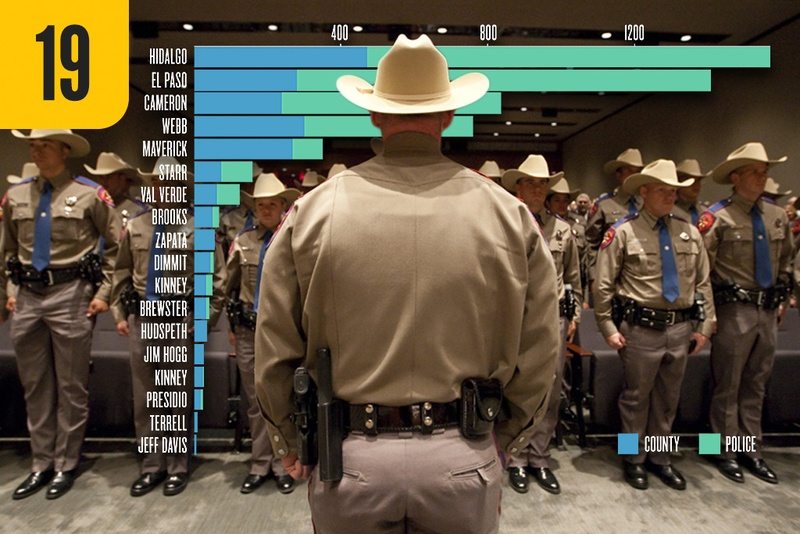 One way or another, the 84th Legislature was bound to pass immigration and border security bills. That was the general consensus after tens of thousands of undocumented immigrants flooded across the Rio Grande into Texas last summer.

Border lawmakers balked, arguing that the border was safe, and that the immigrants were fleeing violence and meant Texans no harm. But Republicans pointed out how exposed the border was and immediately supported a temporary, multimillion-dollar border surge of Texas Department of Public Safety troopers.

During the session, lawmakers looked to make that surge permanent. Though they shelved more controversial items like outlawing so-called sanctuary cities and eliminating in-state tuition for undocumented immigrants, they passed a budget that will spend a record $800 million for border security.

Nearly half of the money will bolster the DPS ranks in the region. House Bill 11, by state Rep. Dennis Bonnen, R-Angleton, will add 250 troopers and support staff for border operations. The agency will be able to recruit officers with four years of law enforcement experience and send them through an abbreviated eight-week training course to become troopers.

Their experience will count toward salaries that, with overtime included, can be as high as $89,000 a year, according to a DPS salary schedule taking effect September 1.

While representatives from border law enforcement communities support the agency and are grateful that lawmakers are trying to help, some are worried that the state will be poaching from local police and sheriff’s departments.

“The DPS does not get involved in investigating our murders and robberies and kidnappings,” said Hidalgo County Judge Ramon Garcia. “What we’re concerned about, and this is what we’ve shared with the [House Homeland Security and Public Safety] committee, is that DPS was going to come in and take away those officers that are now well trained in enforcing the violent crime [laws].”

The agency says those concerns are overblown.

“Director [Steve] McCraw made it known early on in discussions related to the peace officer recruit school that DPS would only accept two officers from any given law enforcement agency at one time regardless of its size unless the head of the agency agreed to allow DPS to hire more than two,” agency spokesman Tom Vinger said in an email. “This was done to minimize the impact on small departments, which was a concern that was expressed by some in law enforcement.”

*93 peace officers were listed as employees at multiple departments.

Fifty-two officers graduated from an eight-week training academy that ended Aug. 14. Vinger said those applicants came from all over the state, with just a few from the border.

But peace officers can also quit their current departments and apply for the regular 23-week trooper training course. Even with less than four years experience, DPS is still poised to pay substantially more than what some agencies offer.

Experience isn’t the only factor, however. The Hidalgo County sheriff’s department and constables offices pay a probationary deputy $37,000. That increases to $39,000 after the first year. That DPS can offer twice that much is going to drain from the potential pool of fresh boots on the ground for local agencies, Garcia said.

Charley Wilkison, the executive director of the Combined Law Enforcement Associations of Texas, or CLEAT, said he supported what DPS is trying to do on the border.

But he added that the concerns raised by some border officials are echoed throughout the state. He points to a billboard he recently saw in Harris County that was trying to lure out-of-town applicants to the Houston area.

“No one in Texas wants troopers to be paid more than CLEAT. We really believe that it helps the profession and increases standards, increases training, increases professionalism,” he said. “But if we just continue on this path of stealing from one another, billboard recruitment, word of mouth, legislative budget items, whatever, then it’s not really a solution.”

Throughout August, The Texas Tribune will feature 31 ways Texans’ lives will change because of new laws that take effect Sept. 1. Check out our story calendar for more.