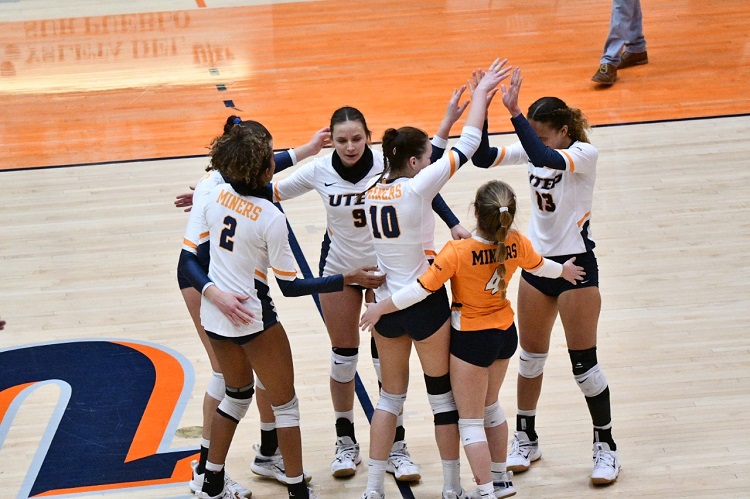 RUSTON, La. – The Miners’ front row swarmed the net Sunday afternoon, leading the club to a victory over Louisiana Tech.

“Our defensive effort was good against a team that doesn’t hit it out of bounds and tries to tip-roll shot,” head coach Ben Wallis said.

“(Pérez Rosas) passed it great today and she blocked it great,” Wallis said. “If she can continue to do those things – good defensive effort and pass at a high level and block it better – that’s going to help us down the road.”

Her deflections – and blocks from her four other teammates – not only gave the Lady Techsters’ attack pause, but it also fed into other aspects of the Miners’ defense. UTEP averaged roughly 20 digs per set and coughed up just two reception errors compared to its 52 receptions.

Pérez Rosas led the Miners with 20 receptions and 12 digs.

“When you block it better, you dig it better,” Wallis said. “When you put a block in the right place and create smaller seams, then your defenders can go dig behind it.”

Fritsche tied Pérez Rosas with a team-leading 12 digs, five of which came in the first set.

“I know LA Tech is a tip-roll shot team, so I made it a goal for myself to not let anything hit the floor and just dig like crazy,” Fritsche said.

UTEP went on an early 6-0 run in the opening frame with four of those points coming from redshirt sophomore middle blocker Kenidy Howard in the form of three blocks – two solos, one assisted by freshman outside hitter Ava Palm – and a kill. Howard finished the set responsible for six Miner points.

Another important piece to UTEP’s defense made her reappearance in the Miner lineup for the first time in three weeks – freshman libero Alyssa Sianez. Siañez recorded seven digs and 17 receptions, but more importantly she instilled confidence in UTEP’s offensive attack while managing the reception pattern in the back row.

“It definitely took stress off my shoulders (not worrying), ‘Oh, I have to take up more space in serve-receive,’” Palm said. “And defensively, (Siañez) just has that magic touch; she three-passes everything.”

The Miners expanded its lead to seven, 23-16, when freshman middle blocker Marina Sanchez entered the match. One point later, Sanchez recorded the first kill of her career.

“It’s just knowing you have to be ready all the time and just (stay) warm on the sidelines and (knowing Wallis) can put (me) in at any given time,” Sanchez said.

Sanchez went on to record four kills in the match.

The Lady Techsters benefitted from three attack errors and a service error to start the second set with an 8-5 lead. The Miners whacked eight total balls out of bounds before winning the set 25-22.

UTEP responded in the third set with its best hitting percentage (.279) and sideout percentage (15-of-19) in the match.

Palm said the Miners began receiving the ball off the serve much better in the final set which set both herself and Fritsche up for monster performances. Palm recorded eight points off six kills – four of them assisted by Fritsche – a block and service ace.

Fritsche racked up nine of her 22 total assists in the frame.

“I felt like (Fritsche and I) had a really good connection on where she needed to place the ball in order for me to get the kill,” Palm said. “Our quality of dig and our serve-receive got way better (which) gave (Fritsche) those opportunities.”

Next up,  UTEP volleyball goes for the sweep of Louisiana Tech tomorrow at 11 a.m. MT in the Thomas Assembly Center.